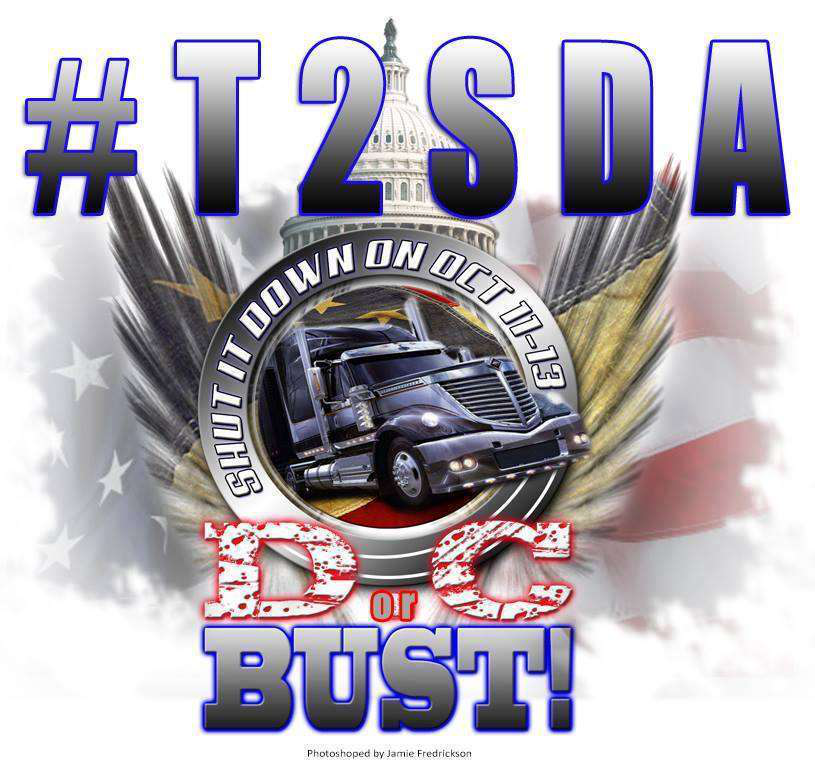 This image is the “Ride for the Constitution” Facebook page’s profile picture. The agenda for the ride and weekend-long demonstration, say organizers, is focused on a mix of trucking and “constitutional” issues. The three-day demonstration has been joined by groups like Overpasses for Obama’s Impeachment, and promoters offer some rally support information via this page.

Organizers of the “Truckers Ride for the Constitution” demonstration have chosen the Doswell Truck Stop in Doswell, Va., as a rallying point for two convoys planned to converge on Washington, D.C., Friday.

A manifesto delivered via the Ride for the Constitution.org website by principal promoters over the weekend detailed the agenda. Following an introduction, the first five demands focus on trucking issues, a latter five on what principal promoter Zeeda Andrews called the “demands of the American people.” Read the manifesto for yourself via this link to the ride’s Facebook page.

Representatives of Doswell Truck Stop, formerly the All American Truck Plaza, said they received calls from event organizers. One of them was Earl Conlon, a driver and author of a 2004 novel that details a fictional scenario in which all of America’s truck drivers go into long-term hiding in protest of various trucking issues.

“I’ll be there,” said Conlon, a Georgia-based former owner-operator now working as a company driver. Conlon has been organizing the bobtail tractors, pickups and motorcycle riders planning to ride into the District of Columbia.

“We’re going to start at 7 a.m.” Friday, said Andrews, a Jacksonville, Fla., resident who is not in trucking directly but considers herself one with drivers given her past touring and performing in truck stops, traveling with driving family members and many trucking associates. Speakers and news media representatives are expected, she added.

Conlon’s convoy is intended as a show of force, he said, attendant to delivering evidence to law enforcement authorities that he hopes will result in “one or two people stuck in handcuffs,” he said – “politicians, senators, congressmen — for violating their oaths of office” to uphold the constitution.

Poll: Will you participate in the “Ride for the Constitution” in some capacity?

A second convoy, this one only tractor-trailers gathering at the Doswell stop and other venues, will then circle the beltway. The intention is simply to cause a traffic jam and get the attention of politicians and the general public, said Andrews.

She encouraged supporting drivers across the nation who are still at work to “ride in the right lane in a convoy formation. If they can do that and wave their flags in support of their fellow truckers, they can show their unity [with other drivers].” The group is actively encouraging convoys to disrupt traffic around state capitols across the nation.

Viewpoint — Kevin Rutherford: Here’s why you shouldn’t shut down Oct. 11-13

Officer Darrell Davis of the permits office within the D.C. Metropolitan Police Department noted that maneuvering large vehicles near areas patrolled by the Secret Service, U.S. Capitol police and/or the parks police could result in forced diversion of trucks to other areas or other problems. Davis noted that their office had no current permit on file for the district demonstration Friday, but that they were aware of reports of it. J.B. Schaffner, a driver participating in the effort and who helped to engineer a similar D.C. ride in 2008, stressed that the bobtail-led convoy didn’t need a permit for its route. Organizers of this week’s event have stressed that intentions are for a peaceful demonstration.

As for the planned beltway event, organizers have not specifically called for freeway blockages or anything of an unsafe nature or murky legality. Taking action against traffic congestion caused by a large number of trucks driving normally would be difficult to enforce.

More on the five trucking grievances included in the ride’s manifesto.