The Georgia medical examiner who was arrested last year for allegedly issuing thousands of bogus medical certifications to truck drivers has now pleaded guilty to the charges brought against him in the case. He will be sentenced Aug. 28, according to court records.

He was arrested in late December on eight counts of fraud and false entry charges. Following a tip from a driver, three undercover agents, posing as truck drivers, sought to renew their medical certification at Lefteris office. In all three instances, Lefteris skipped required tests yet still issued certification. The DOT further alleges Lefteris uploaded to the DOT made-up results for tests he didn’t perform.

Lefteris originally pleaded not guilty to the charges. Court documents filed last month, however, show he entered into a plea agreement and changed his plea to guilty. Court documents did not reveal the terms of Lefteris’ deal.

The charges to which he pleaded guilty carrier a maximum sentence of 25 years in prison and $500,000 in fines. However, Lefteris’ sentence will likely be well below the maximum, given his plea deal. 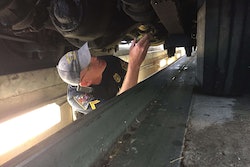