Electric and diesel muscle combine in hybrid systems that store energy, cut fuel usage and reduce operating costs. If you want to see the face of tomorrow’s powertrain, look at what’s on the road today.

In the near future, hybrid Class 8 trucks combining powerful motor-generators in the drivetrain and a new type of potent battery will make over-the-road trucks significantly more fuel-efficient than today’s models. The improved efficiency will emerge largely from the ability to store energy recovered during braking.

Fuel savings will come from generating power for in-cab hotel loads while the truck is running, or with the engine in an efficient, loaded, fast-idle operating mode, and storing it. This energy will provide the power needed to cool the cab and run onboard devices like refrigerators, televisions and microwaves via the batteries. The process will reduce the need for idling and its harsh effect on engine oil. More savings will accrue from lower maintenance costs because hybrid systems help in easing the workload of high-maintenance clutches and foundation brakes.

Hybridization is likely to be a big fuel saver in all applications except cross-country routes, where minimal braking is needed.

Hybrids so far retain the standard service brake system. The traditional air brakes are necessary both because the hybrid braking effect works only through the drive wheels and because, at least at this stage of development, electric motors can’t create the abrupt, powerful stopping force needed for hard braking.

Even smaller engines can be combined with hybrid technology for additional fuel savings, practical because of hybrid systems’ ability to add torque and horsepower for acceleration and hill climbing. Kenworth says its goal is to enhance fuel economy by up to 30 percent in pickup and delivery applications and up to 50 percent in utility and service operations.

Gosbee says medium-duty hybrids run at 300 to 350 volts, but may be introduced at up to 600 volts if the safety issues can be handled. That’s the same operating voltage estimated by Sharon Gunn, chief product manager of hybrid technology for Mack and Volvo, at the June Hybrid on the Hill event in Washington, D.C., organized to clue Congress into the technology’s value. Higher voltage means greater efficiency and increased power.

Bill Conn, Peterbilt’s manager of advanced concepts, says the truck maker will use the Eaton Corp. system that offers 310 lb.-ft. of torque and 60 hp from the electric motor. While that may not sound like much torque, Conn says, “With an electric motor, you get all this torque at zero rpm. Because of that fact, you can easily move an 80,000-pound vehicle with the motor.” This is true when the motor is driving through a 10-speed transmission used in Peterbilt hybrid prototypes.

Lithium-ion batteries are another key component. Gosbee says, “Hybrid energy is about recovering as much energy as possible and re-using it. Recovery is a significant way to save energy. But batteries will need to get smaller and lighter to store enough of this energy.”

The lithium-ion battery’s high “energy density,” meaning minimal size and weight, and its ability to accept a charge quickly, make it the battery of choice. It can handle high discharge rates for high peak motor power, too. “It’s the size and weight of the batteries that limit how much you can use the hybrid system to help out acceleration and braking,” Gosbee says. “They also limit how far you can run on pure electric power.”

Mack’s hybrid design is used mostly on Class 8 refuse trucks. However, for over-the road or regional Class 8, two basic designs are in development. One is likely to be a significantly upgraded version of an Eaton system used on medium-duty trucks built by Daimler Trucks, Kenworth and Peterbilt. The other will come from ArvinMeritor in 2012 or 2013.

The two systems will be based on significantly different architecture. The Eaton system is a parallel hybrid, says Dmitri Kazarinoff, vice president of hybrid systems development at Eaton Vehicle Group. It will make use of an ordinary mechanical transmission, for example a 10-speed Ultrashift. The electric motor will be installed between the clutch and transmission, with the motor driving the transmission input shaft. This means the motor-generator will always drive and be driven (during braking) through the transmission. This design allows the transmission gearing to multiply the motor’s torque during startup. Disengaging the clutch allows the motor to launch the vehicle from rest with the engine disconnected from the rest of the drivetrain.

The system will include a controller-inverter that will allow battery power to be converted to AC to operate hotel loads running at 120 volts, as well as the hybrid electric motor. Eaton is partnering with Daimler and Peterbilt to develop the system.

ArvinMeritor will introduce a series-parallel hybrid system. It will use a simple mechanical transmission, says Chad Mitts, director of product line management, hybrids and new technology. Combined with an electric motor, the system will drive the wheels through a driveshaft and conventional drive axle. The gearbox will have only two gears, which will be used only above 48 mph.

However, at less than 48 mph, the system will operate in what Mitts described as “silent mode,” or full electric drive, using the electric motor only. At low speeds, the diesel will run only to charge the batteries. The diesel can stay off for about 20 minutes at a time, especially useful in cities or ports where emissions and noise must be limited.

What makes all this practical is the system’s 180-kilowatt motor-generator, which will produce 240 hp. Part of the reason the truck will be able to run in silent mode is that, especially with such a large motor-generator, much of the braking energy will be channeled into the batteries rather than being lost.

Mitts adds that the powerful motor-generator also means that “no friction clutch is needed for startability.” The motor will be located at the rear of the transmission, he adds, between it and a conventional driveshaft. When running in silent mode, the transmission will simply be out of gear.

ArvinMeritor is partnering with Walmart, Navistar and Cummins to develop the system.

Mack’s system is a “blended hybrid,” says Dave McKenna, director of powertrain sales and marketing. Its motor-generator, installed near the clutch, has components that enable power generated during braking to be stored in lithium-ion batteries. “Prior to this, friction linings merely produced wasted heat,” he says.

Mack has combined the motor-generator and batteries with an I-shift, fully automated transmission. The hybrid system launches the vehicle using electric power. “An electric motor has plenty of torque at 1 rpm to get the vehicle moving without input from the diesel engine,” McKenna says. The motor is integrated with the I-shift, allowing the standard drivetrain to begin to take over at 5 to 7 mph. Also, the hybrid system allows the I-shift to skip gears appropriately, improving both performance and smoothness of acceleration. The system not only saves fuel, it also helps brake linings and drums last longer, lengthening brake job intervals by 2.5 to 3.5 times. “Payback is almost immediate,” McKenna says.

More savings accrue, he says, from the system’s ability to use the “immediate peak torque” of the electric motor to eliminate using the clutch to start the vehicle from rest. Instead, it’s used only to disconnect the engine from the rest of the drivetrain, allowing the diesel to idle with the truck stopped or in the early stages of acceleration. Cutting normal startup slip time virtually eliminates clutch wear.

While Volvo does not have a hybrid research project in the United States, says spokesman Jim McNamara, the company will benefit from research and testing done by its parent, Volvo Trucks, in Sweden. Volvo is developing a refuse vehicle hybrid similar to the Mack system in Europe.

“The goal of our hybrid is a reduction in fuel consumption,” says Daimler Trucks’ Paul Menig, chief engineer for mechatronics. The biggest potential savings will likely be in fuel conserved via recovered braking energy, although the amount saved will depend on the application. International’s Gosbee says, “Coast to coast at 65 to 70 mph, at constant speeds, you won’t be able to recover that much. But, in the East and West Coast north-south corridors, the picture gets a lot better. In some applications, significant energy can be recovered, at times doubling efficiency, which has an enormous impact on fuel economy.” n

How hybrids mesh with the drivetrain

The electronics of hybrids not only control the system but also convert the alternating current from the generator to direct current at various voltages for battery charging and vehicle use. They also convert the DC from the batteries back to AC for use in the motor as well as for hotel loads.

There are two basic types of architecture – parallel and series.

A PARALLEL HYBRID connects both the diesel engine and the electric motor to the drivetrain, usually by inserting the motor generator between the clutch and the transmission. The two power sources then share the job of moving the vehicle forward, sometimes providing torque simultaneously. They also share braking done through the drive axles – that is, the electric motor shares the job of slowing the vehicle with the engine brake.

A SERIES HYBRID resembles a diesel-electric locomotive, eliminating the solid driveline linking the diesel engine to the wheels and using the diesel only to generate electricity. Such hybrids have separate electric motors that drive the wheels. It is sometimes called a SPLIT HYBRID, or series-parallel system when the system can operate as a series hybrid under one set of conditions, and then lock the engine to the drivetrain under another and operate as a parallel system. This is the case with the ArvinMeritor design.

HVAC, microwave, TV — bring it on

Hybrid technology is ideally suited for handling hotel loads overnight in a sleeper. The combination of powerful, fast-charging batteries and a big motor-generator promises to provide a high level of auxiliary power.

Paul Menig says Daimler Trucks’ hybrid has integrated an electric air-conditioning system into the existing duct system of its cabs and sleepers, and employs a fuel-fired heater to keep the driver comfortable in cold weather.

Dmitri Kazarinoff says the maximum charging rate of Eaton’s motor-generator is 44 kilowatts at a fast idle of 1,000-1,200 rpm. An occasional 4-6 minute cycle could charge the batteries, while a 120-volt AC system is cooling the cab during a rest stop. Under these conditions, he says, “the diesel is under a significant load, and is efficient.” And, because the motor-generator can crank the engine at lightning speed, without the noise and low-rpm shake of a standard starter, drivers will be able to sleep through charging cycles. 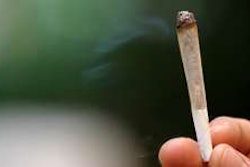 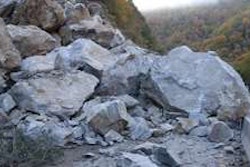 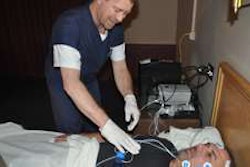