The price of noise

As cities nationwide move to ban noise from engine compression brakes, some of the more successful and common-sense efforts go to the source of the problem instead.

States that pay attention to adequate mufflers are most effective in controlling noise because those laws can be easily enforced, says Joe Rajkovacz, regulatory affairs specialist with the Owner-Operator Independent Drivers Association. Ordinances banning use of engine brakes often carry heavy fines and can be confusing and possibly illegal, he says.

Connecticut, Colorado, Maine, Montana, Oregon, Wyoming and Utah are among states that actively regulate the working order of mufflers. In July, more than 10 Western states in the Multi-State Highway Transportation Agreement studied a measure in support of adopting a single muffler regulation in the region’s heaviest traffic corridors, says association president R.J. Hicks.

Meanwhile, local and state regulations vary widely. Some cities and counties have no law, and others have a small fine, such as Illinois, where use of an engine brake that has an inadequate muffler can be fined up to $75. Similarly, McAlester, Okla., charges no more than $144. Others have the authority to inflict a lot more pain, such as Oregon’s maximum $720 fine for unmuffled engine brakes. More common is a maximum fine of $500 for unmuffled engine brakes or excessive noise in general, as in Montana, Connecticut and Charleston, W.Va.

Rajkovacz recalls an OOIDA member who was socked with a $600 fine in Pennsylvania a few years ago for using an engine brake as he exited an interstate ramp. The police officer was waiting underneath the bridge deck, which conveniently “amplified the noise,” Rajkovacz recalls. “This kind of enforcement is nothing less than an abuse of the spirit of the law and totally intended to fatten local coffers. Most of these local ordinances are illegal.”

Rajkovacz says cities making their own ordinances have to go through their state DOT, which then must apply to the U.S. Department of Transportation for a more restrictive variance to the federal noise ordinance that limits heavy-duty truck sounds to 80 decibels at 50 feet from the source.

States that regulate mufflers, however, have an understandable case, Rajkovacz says. The excessively noisy trucks are often ones from which factory-installed mufflers have been removed, a violation of federal law, he points out. “The decibels go through the roof on those,” says Rajkovacz, a former owner-operator.

Peter Coughlan of Maine DOT’s Local Roads Center says enforcing noise levels by measuring decibels is difficult to begin with. Furthermore, the culprit is not the engine compression brake but a muffler that is faulty or missing, leaving the engine to rumble loudly through so-called straight pipes, usually exceeding 80 decibels.

As more trucks with 2007 emissions technology enter the market, engine brake noise will cease to be an issue because of diesel particulate filters, say Pittsburgh Power President Bruce Mallinson and Bill Shutt, an emissions manager at Tenneco.

“Focusing on an engine brake alone doesn’t work,” Paré says of the typical municipal sign prohibiting engine brake use. “We want to make sure people are solving the right problem.” 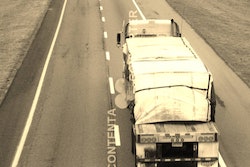