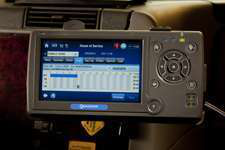 An electronic on-board recorder like this Qualcomm MCP200 may be mandated for thousands of carriers. (Photo Mike Roemer)

The Federal Motor Carrier Safety Administration has decided to mandate electronic onboard recorders on motor carriers that are shown in a single compliance review to be in serious noncompliance with any major hours-of-service regulation.

The final rule takes effect on June 4, 2012, giving EOBR suppliers time to adjust to the new performance standards that also were adopted in the final rule.

The rule – to be published Monday, April 5, in the Federal Register – is significantly more stringent than the regulation proposed in January 2007 when the agency planned to mandate EOBRs based on a review of HOS records during each of two compliance reviews conducted within a two-year period.

FMCSA estimates that nearly 5,700 interstate carriers will use EOBRs after the final rule’s first year of implementation. In January 2007, the agency estimated that approximately 930 motor carriers would be subject to mandatory EOBRs. Carriers that would be subject to mandatory EOBRs if the rule were in place today have 40 percent higher crash rates than the general motor carrier population, FMCSA says.

FMCSA also elaborated somewhat on its plans to conduct another rulemaking to expand the scope of mandatory EOBRs due to “the potential safety risks associated with some motor carrier categories, such as passenger carriers, hazardous materials transporters, and new motor carriers seeking authority to conduct interstate operations in the United States.” The agency said it could not adopt a broader mandate in the final rule because the scope of
the rulemaking was limited to a compliance-based regulatory approach implemented through a remedial directive.

Under the final rule to be published April 5, if an audit finds that a motor carrier has a violation rate of 10 percent or greater for any major HOS regulation listed in a new Appendix C to part 385, FMCSA will require the carrier to install EOBRs in all of its commercial motor vehicles — regardless of when they were built — and to use the devices for HOS recordkeeping for two years.

The new EOBR performance standards replace the current standards that have been in place for more than 20 years for what previously have been called automatic onboard recording devices (AOBRDs). The new standards will be required for EOBRs installed in CMVs manufactured on or after June 4, 2012, regardless of whether those EOBRs are installed voluntarily or subject to an FMCSA remedial directive.

Carriers using recorders voluntarily may continue to use already-installed devices meeting the previous AOBRD standards for the remainder of the vehicle life. Carriers that are required to install recording devices as a result of poor HOS compliance will be allowed to use AOBRDs if they already have vehicles equipped with them and can establish that their drivers understand how to use them.

FMCSA also finalized its plans to offer incentives to carriers to install EOBRs voluntarily. The agency revised its compliance review procedures to permit examination of a random sample — as opposed to a focused sample — of drivers’ records of duty status after the initial sampling and provided partial relief from HOS supporting documents requirements under certain conditions.

FMCSA estimates the rule’s cost at $139 million a year and safety-related benefits at $182 milli0n for a net benefit of $43 million annually. In so doing, the agency said that it assumed carriers would use the least expensive device that satisfies the requirements of the rule — the RouteTracker sold by Turnpike Global and using the Sprint network.

In addition, FMCSA’s cost estimates take into account carriers that already use AOBRDs that can still be used as long as the truck is in service and fleet management systems that would allow compliance just by activating hardware or software functions on existing devices. The agency also accounted for the savings carriers would realize because they no longer would have to purchase and process paper logs.

The new EOBR performance standards capitalize on great leaps in technology since the AOBRD standards were adopted in 1988 – the same year, coincidentally, that Qualcomm introduced OmniTracs. So satellite positioning was practically unheard of in trucking when FHWA adopted Part 395.15. Unlike the AOBRD standard, therefore, EOBRs must automatically record the CMV’s location at each change of duty status and at intervals while the CMV is in motion.  EOBRs also must conform to specific information processing standards to ensure the data security and integrity. Drivers will be able to add information to the EOBR record, but the recorder will maintain the original information and track annotations.

In 2007, FMCSA proposed to allow carriers to use recorders that were not synchronized to the vehicle’s engine, but in the end the agency opted to maintain that existing requirement in order to ensure the accuracy of electronic records of duty status. Other changes to the proposal in response to comments include:

* Increasing from 1 minute to 60 minutes the time interval for recording the location of a CMV in motion;
* Making the recording of state-line crossings optional;
* Removing the requirement to record a driver’s acknowledgement of advisory messages;
* Reducing the amount of time a CMV is stationary before the EOBR defaults to on-duty not driving status;
* Removing the daily ceiling on EOBR accumulated time inaccuracy or “time drift”;
* Revising the requirements to allow a driver to enter annotations to denote use of a CMV as a personal conveyance and for yard movement;
* Removing the requirement for an EOBR to display HOS data in a graph-grid format;
* Specifying information technology security and integrity requirements; and
* Adding and strengthening provisions concerning driver and motor carrier responsibilities relating to accurate EOBR records and support system performance.

For a copy of the final rule prior to its publication, go to www.federalregister.gov/OFRUpload/OFRData/2010-06747_PI.pdf. The published version and supporting documents will be available April 5 at www.regulations.gov by searching FMCSA-2004-18940.