Navistar Inc. launched its eStar all-electric truck in Portland, Ore., May 25, the first in a series of introductions for its zero-emissions vehicles.

Additional launches are scheduled for June in Sacramento, Calif., and this summer in Chicago. Future introductions are proposed for Detroit and East Coast locations, a Navistar spokesman said at a press event.

The company has selected the initial International dealerships to offer the truck aimed at the Class 2c-3 market. Dealers in Tacoma, Wash., Sacramento, Los Angeles and Chicago will be offering the vehicle, which has a 100-mile driving range between battery recharges.

Asked if businesses are ready to buy a $149,900 short-haul truck, Jonathan Wyman, president of Cascadia International in Tacoma, said, “There are plenty of companies in the Seattle area and Portland that want to go green and are willing to step up to the plate.”

Westrux International in Los Angeles will be servicing the first four eStars that were bought by FedEx for use in that area.

Production of eStars is under way at a Navistar plant in Elkhart County, Ind., which also makes Monaco motorcoaches. The goal is to build 400 units this year and 1,000 in 2011, says Mark Aubry, vice president of sales and marketing for the Navistar-Modec Electric Vehicle Alliance that is producing the vehicles.

Those production numbers were promised by Navistar to receive a $39.2 million federal stimulus grant last August. Since then the company has received certifications from the U.S. Environmental Protection Agency and the California Air Resources Board.

Aubry said that as battery technology improves and the charging network infrastructure expands, the driving range for all-electric vehicles could widen to 200-300 miles. Electric vehicles serving the long-haul market “will probably never happen,” he said.

Aubry added that cargo van-delivery truck is not the only application for eStar. Flatbed and pickup models are being developed.

Current eStars are outfitted with a 7 kilowatt charger, running on 220 volts and 32 amps and requiring 8-12 hours to recharge. A version planned for 2011 equipped with a 10 kilowatt charger will reduce charging time to 6-8 hours.

Jim Hebe, Navistar senior vice president North American sales, used the eStar introduction to note that Navistar has developed vehicles powered by compressed and liquefied natural gas that are helping to reduce dependence on oil. “In long haul, nothing will replace clean diesel,” he said. 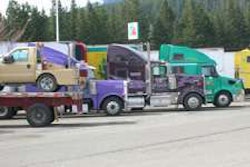 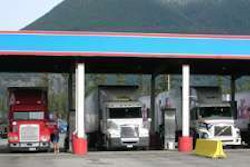 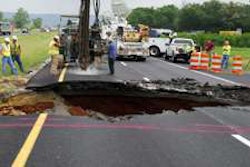 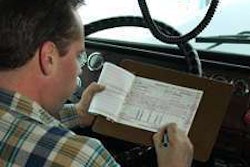