Cash tolls for five-axle vehicles will climb to $18 from the current $11.25. In July 2012, cash tolls for vehicles or combinations with three or more axles on these bridges will increase to $5 times the number of axles, so a five-axle truck driver will pay $25.

FasTrak rates for truckers using BATA bridges after July 1 are not yet available.

The toll hike went into effect in July 2010 for most vehicles, but the increase for multi-axle vehicles was delayed to allow trucking firms to incorporate higher tolls into new contracts with shippers.

BATA approved the higher tolls to pay for seismic retrofits of the Antioch and Dumbarton bridges, the increased cost of debt financing and to compensate for revenue losses from the decline of toll-paying traffic in recent years. 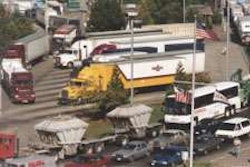