Protect yourself against shippers who cancel loads

I learned today more about Scrivener software. Learned by using it while writing my book.

Diane and I woke up this morning in a retail area in Greater Los Angeles. We spent the night there because the load that we were supposed to pick up nearby last night did not ship. Our agent told us that we would be paid extra if we stayed on the load and picked it up today. We agreed.

The load was not scheduled to pick up until 4:30 p.m. California time. That gave me the whole day to work on my book and other stuff. When we arrived at the shipper, we were told that the shipment would be delayed until 8:30 p.m. That was OK since pay had already been arranged for us to stay on the load. It gave me more time to spend on my computer.

Around 6:30 p.m. two men came to the truck to tell us the load would not ship today. We notified the agent of the cancellation and told him that we were done with this shipper. We got clear of the load and listed as available on the Landstar system but it is unlikely that anyone will have freight for us until business hours tomorrow.

As we prepared to leave, I wondered, why would two men come to the truck to tell us the load canceled for the second day in a row? The message could have just as easily been delivered by one man. It may because this is a bad-faith shipper who is accustomed to ordering trucks in case they are needed and then canceling the loads if the goods are not ready to ship. It may be that two men came to the truck because in the past they found themselves dealing with irate drivers who found themselves screwed like we did today.

That’s pure speculation on my part but when negative events happen — twice in two days with the same shipper — your mind tends to move toward negative thoughts. What can a trucker do in situations like this?

At our former carrier the answer was nothing. We were lucky there to get any money at all for a truck ordered and not used event (dry run, as they called it there). Once we got wise to one shipper who did this to us three times, we refused to serve that shipper again.

A time then came when we were the only available truck qualified to handle this shipper’s load. We explained the history and said we would be happy to cover the load if the carrier would assume the risk of yet another cancellation. If the carrier would promise in writing (Qualcomm) to pay us enough money to make the run profitable even if the load canceled, we would be pleased to serve this customer. But if we were the ones being asked to take the risk with this shipper who was already known to act in bad faith, the answer was no.

The dispatcher consulted the supervisor. The supervisor would not agree to the deal. We said no and that was that.

Expediters should insist on being paid for their services. If you don’t, there are carriers and customers out there who will take full advantage of your generosity without the slightest concern for your financial well-being.

Today’s twice-canceled run is a new circumstance for us at Landstar. Loads canceled more frequently at our former carrier often with little or no compensation to the truck. We have now two days of truck ordered and not used and are waiting to hear from the agent what our compensation will be. 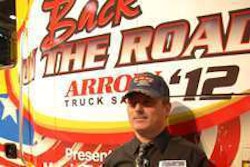