The Federal Motor Carrier Safety Administration has confirmed to the International Window Film Association that window tinting is permitted on commercial motor vehicles.

In a Sept. 26 letter to FMCSA, the IWFA said “historically, the enforcement community and the trucking industry have clearly taken the position that ‘no’ film was allowed on any vehicle operated as a commercial vehicle.”

The agency responded that such enforcement would have been done contrary to regulations. It also had published guidance that said trucks can use “clear” window films as long as at least 70 percent of the normal light is transmitted.

Anyone encountering an instance where compliant window films have been disallowed should contact the Office of Enforcement and Compliance, FMCSA says.

The Skin Care Foundation says ultraviolet radiation is associated with most skin cancers, which affects one in five Americans, the Foundation says. In 2011, the Journal of the American Academy of Dermatology published extensive research that indicated nearly 53 percent of U.S. skin cancers occur on the left side, or “drivers’ side,” of the body.

SCF recommends clear window films with a minimum 70 percent visibility rating for the windshield and side windows. One such example is Solar Gard Ultragard UV, which, the company says, filters out 99 percent of damaging ultraviolet rays but is FMCSA-compliant.

It also recommends applying sunscreen every two hours. The lotion should have a Sun Protection Factor of 15 or higher and contain a combination of UV-blocking ingredients, such as avobenzone, ecamsule, oxybenzone, titanium dioxide, and zinc oxide, SCF says. 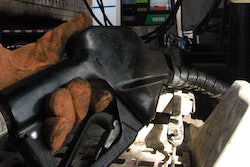