The Federal Motor Carrier Safety Administration has accepted a fourth carrier to its cross-border trucking pilot program and responded to comments over the most recent round of Mexican carriers applying for authority.

Transportes Del Valle De Guadalupe of Baja California will operate one truck and one driver beyond the commercial border zone, as have the other three program participants.

The FMCSA published a May 11 Federal Register Notice and Request for Comment on Transportes’ Pre-Authorization Safety Audit, required of Mexican carriers applying to operate beyond the border zone. The notice also provided the PASAs of Higienicos Y Desechables Del Bajio and Servicios Refrigerados Internacionales.

Associate Administrator William Quade responded June 8 to the Owner-Operator Independent Drivers Association’s letter concerning Higienicos’ PASA, which contained the wrong signature and carrier name. The law does not require the FMCSA to outright reject an applicant any error, but permits discretion when the application is otherwise substantially compliant, Quade stated.

Agency officials are requiring Higienicos to submit a corrected form for the agency to publish.

Quade wrote that PASA and SMS data provide the public sufficient applicant information, despite Advocate’s position that FMCSA should publish additional safety information. He also defended that the agency’s vetting process as a safeguard against applicants’ attempting to hide safety record issues.

Roughly another dozen applicants have withdrawn or been dismissed, Quade said at a May 23 meeting of the FMCSA Motor Carrier Safety Advisory Committee. Some dropped out after filing the wrong form or because they no longer were interested and officials dismissed the other applicants after these carriers failed security vetting.

The FMCSA inspector general‘s first program audit is expected to soon, which notes the program’s low participation and makes suggestions for improvement, he added.

The low number of participates was noted in a lawsuit filed in federal appeals court by OOIDA Teamsters, Public Citizen and Sierra Club against the FMCSA to stop the program

Mexico’s government responded to the charge that the program lacked a representative sample in a friend-of-the-court brief filed on behalf of the agency, The program has been postponed or halted several times in previous years, which has contributed to discouraging carriers from seeking involvement in the present program, Mexico’s counsel wrote.

There has been no activity in the litigation since OOIDA filed its final reply brief April 4. 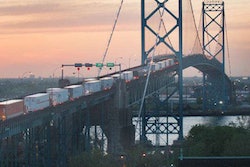