There were lots of loads moving at higher rates last week, which included both the end of the quarter and the last few business days before a holiday weekend. (The increased demand wasn’t a big surprise.) Still, it was a nice lift, especially after two months of improvement, well in evidence with our last report: 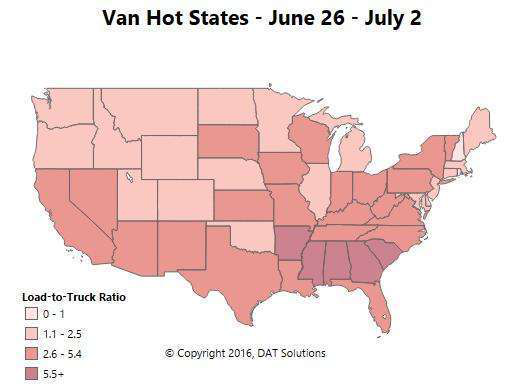 The Sun Belt is still hot for vans, especially in the Southeast. End-of-quarter and pre-holiday freight was even stronger than expected last week in Atlanta, Charlotte and Memphis, which were the top three markets for outbound loads on the spot market. The No. 4 and 5 spots were taken by Houston and Dallas. On the West Coast, there were lots of loads available in Los Angeles, and rates rose 11 percent outbound from Stockton. 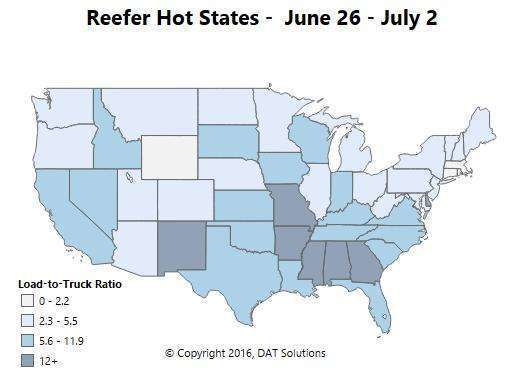 Reefer freight remains strong in the Southeast, but the Mid-Atlantic markets of Philadelphia and Elizabeth, N.J., won the award for “most improved” this past week. Fruit and vegetable harvests in New Jersey, combined with refrigerated food from warehouses, answered the July 4 weekend demand for grocery items. Reefers were very active in Central California last week as well, with increased volume from Fresno and a boost to outbound rates from Sacramento.

Northbound lane rates continue on the upswing as well out of those hot markets of Atlanta, Memphis and Charlotte, for both vans and reefers. Atlanta to Chicago is doing well as a reefer roundtrip — 1,430 miles at an average of $2.03 per mile. If you want to make more money without adding any loaded miles, however, split the north-south leg in two with a load of dry or refrigerated freight from Chicago to Evansville, Ind., for example. The load-to-truck ratio in Evansville has averaged 14.7 loads per truck for reefers, and outbound rates are outstanding. You’ll add an average of 55 cents per mile, for a total of $3,600 instead of $2,900 for three days of driving, plus the extra pick and drop. 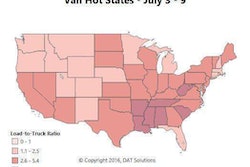 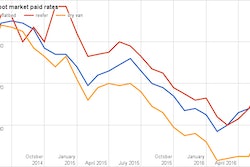 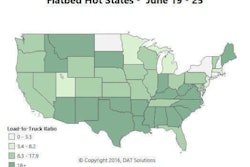