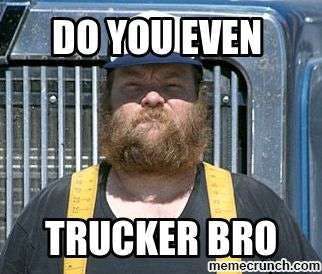 For the past five years, since I jumped on the truck and George committed to becoming an owner-operator, we’ve pretty much spent the majority of our time trucking. Except for brief breaks for an engine rebuild and George to give birth to a kidney stone the size of a Cap’n Crunch Peanut Butter Puff, we’ve been in the big truck, and it’s been our main method of conveyance for everything – work, shows, vacation and anywhere else we needed or wanted to go. Y’all know how it is, everything revolves around the big truck.

It’s not often we’re in a personal vehicle, but we had to take rentals to the last couple of truck shows while our baby was being painted. (I know you’re dying to see her – believe me, I feel you. The big reveal is coming.) So George has been in a four-wheeler on the highway more the past couple months than he has been in the past five years, and it’s absolutely hilarious to watch him do trucker things in a little SUV. (Sorry, babe, but it is.)

We were in the mountains on the skinny roads, missed a turn and ended up on a farm road on top of a ridge. The view was spectacular, but the other side down the ridge was about a 6 percent grade on a super skinny, not-so-much-asphalt-as-gravel road, which was no problem, but instinct kicked in for the trucker, he reached down for his trusty Jake and it wasn’t there.

“Did you just try to flip on the Jakes?”

“Yes you did. You reached for your Jake when you saw the downgrade.”

And he really is. He has so many tells when he’s in a private vehicle, like backing into parking spaces, no matter where we are. I watch for things like this when we’re out and about – I can pinpoint a trucker by watching them park. They circle the lot, with unnecessarily wide turns for their Ford Focus, find the space with the easiest access, drive past it, and back into it. Every single time.

We’ll be in the big truck for the next show, so I won’t get to see him actually pull into a coop in a personal vehicle, but he’s certainly come close to doing it. I think the most trucker thing I’ve ever seen him do is attempt to enter log information into the car GPS. He kept tapping the screen, and I know he was waiting for his hours of service to come up, so he could go off duty while we ate dinner, but he’ll never admit it.

I love my trucker. 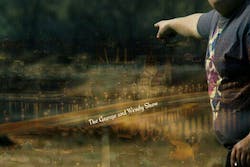 Scoot McGutbagger and the 62 mph truck 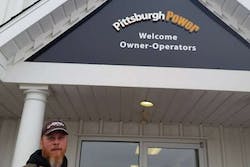 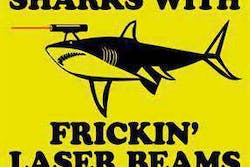 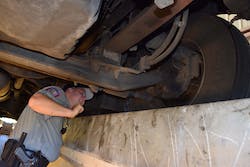 Minor changes made to inspection regulations