The U.S. Department of Transportation Aug. 26 released a proposed rule that would require trucks weighing more than 26,000 pounds to be equipped with speed limiting devices (also known as speed governors or speed limiters), but the regulatory body did not propose a speed to which trucks would be limited.

The DOT appears to be leaning toward 60 mph, 65 mph and 68 mph as the potential limited speed, given the analysis on those speeds released within the rule.

The DOT is seeking public comment on the rule for 60 days following its official publication in the Federal Register, which is scheduled for next week sometime. What the limited speed for heavy-duty trucks would be is one aspect of the proposal the DOT is seeking feedback on during the public comment period. The other key element on which regulators seek industry feedback is whether the mandate should apply only to new trucks or to all trucks.

It will use comments submitted by trucking industry stakeholders and others when developing the final iteration of the rule. Overdrive will publish a link to provide feedback to the agency on the rulemaking when the comment period opens.

The Notice of Proposed Rulemaking is fairly bare bones, offering little in the way of specifics about what a final rule would look like. The proposal is more of a solicitation for feedback from carriers and equipment makers about the technical aspects of requiring speed limiters and employing them on trucks already in use.

The DOT says speed limiters would “reduce the severity of crashes…and reduce the resulting fatalities and injuries.”

The rule also would be wide-reaching, according to the proposal, which notes “virtually all of these vehicles (trucks weighing more than 26,000 pounds) would be limited to that speed.” 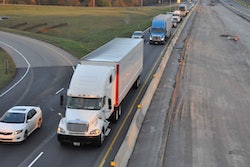