President Trump’s broad-level plan for bolstering U.S. infrastructure funding with investments from the private sector could buoy the country’s ability to repair overly worn highways and help stabilize the Highway Trust Fund. It also likely means more tolls for truckers, especially near urban areas, as companies seek a return on their investment.

Trump’s most recent call for ramping up infrastructure funding came last week, in his first address to Congress. He reaffirmed his campaign pledge for a $1 trillion infrastructure act, saying last week it should be funded by “both public and private capital.”

There’s been no shortage of talk in Washington — and nationwide — in recent years about the need to revive the country’s exhausted Highway Trust Fund. The U.S. spends about $15 billion more from the HTF than it takes in each year, says Joung Lee, policy director for the American Association of State Highway and Transportation Officials (AASHTO).

“We’re going to need an additional $110 billion in the next 10-year window just to stand still,” Lee says. “But obviously our infrastructure needs are such that current funding levels are nowhere near enough.”

The Highway Trust Fund has used gas and diesel taxes to fund U.S. road projects since the 1950s. However, Congress hasn’t raised the gas tax since 1993, and inflation has caused current fuel tax rates to lag far behind the country’s spending needs. Greater fuel efficiency of modern vehicles also contributed to the HTF’s waning revenue stream.

Some groups, like the American Trucking Associations, contend simply raising per-gallon tax rates on diesel and gasoline would help solve the problem, but lawmakers in Washington have been reluctant to take what they believe would be an unpopular step.

How much can private money fill the highway funding void? Not as much as Trump and other advocates for privatization might hope. “I don’t have a percentage, but I would say just as an estimate it would be much less than 10 percent,” says Greg Cohen, head of the Highway Users Alliance. “Private investment can handle some big new projects, but much more of course needs to be done to get the current system up to a state of good repair and to protect our commerce corridors across the country.”

Cohen says Congress could use looming bills on tax reform to direct more public money to highways. “Advocates for that should not give up and assume it’s all tolls and public-private partnerships,” he says.

Trump pledged during his 2016 campaign to take the approach he asked Congress for last week: Incentivizing private companies to invest in U.S. infrastructure with cheap financing and tax breaks.

Private financiers would also be incentivized by the opportunity to turn a profit off their investment, particularly on high-traffic roadways heading in and out of cities. “Tolls are the only way to provide the revenue stream to interest the private sector in the way President Trump has broadly laid out,” says Stephanie Kane, spokesperson for the Alliance for Toll Free Interstates.

“The good thing about using private sector funding is that they take on the risks. But if the money is not coming from the government, it’s going to need to come from somewhere,” she said.

ATFI will push for funding alternatives that won’t prompt an uptick in tolled roads, Kane says. The group is adamant about retaining the federal ban on tolling existing Interstate lanes. “There’s no one silver bullet option for transportation funding, but tolls are the worst of those options,” Kane says. A “blend of funding” mechanisms is needed to solve the country’s infrastructure problem, she adds.

Other groups see private investments in U.S. highways as a means of shoring up the country’s dire need for action on the issue, even if it means more tolls. AASHTO’s Lee, for instance, says options for private funding should be part of the discussion, even if they’re limited in their ability to stabilize the Highway Trust Fund.

Public-private partnerships “are certainly an option and we certainly don’t want to preclude them as a tool for funding and financing approaches,” he says. “But P3s can only address a small spectrum. They would not be applicable beyond certain projects.”

Such projects, Lee says, include “signature projects” — those that are large, expensive and risky endeavors, and mostly in and around metro areas. “We still need a robust public funding backstop, whether at the federal level or the state level,” Lee says.

Though the U.S. has traditionally leaned on public dollars for its highway system, that’s not the case in other countries, including European countries with robust highways and trucking industries. These systems could provide a case study for how the U.S. handles greater privatization of its infrastructure, says Pat Jones, director and CEO of the International Bridge, Tunnel and Turnpike Association.

“Our desire to spend on infrastructure far exceeds the available money,” Jones says. “I think the Trump team is wise to put all options on the table, including private investment.”

Countries like France, Italy and Spain, among other European nations, have relied heavily on tolls to support highways, Jones says. “Operating and maintaining top-level super highways in those countries is as commonplace to them as having a tax-supported interstate system is to us,” he says.

Still, private investment alone isn’t enough in the U.S., Jones says. “We’re going to need significant federal investment that would come from taxes or borrowing or some other form.”

Jones also says toll-supported projects fit where traffic volume is significant and can generate enough revenue to repay investors. Rural stretches of highways, which constitute most of the country’s roads, aren’t. 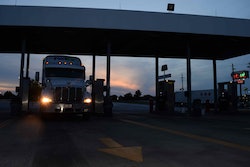