Retread Instead, a group aimed at advocating for retreading tires, has launched a letter-writing campaign to inform U.S. senators of the benefits of retreading.

A group working to boost awareness of the environmental and economic benefits of retread tires has launched a “Dear Senator” letter campaign to relay their their concerns to U.S. lawmakers.

Retread Instead says its main function is to support imposing tariffs on imported Chinese truck and bus tires that are non-retreadable.

The goals of Retread Instead’s letter-writing campaign are to inform Senators about:

According to Retread Instead, the International Trade Commission voted in 2017 not to impose tariffs on the importation of Chinese-made truck and bus tires. The United Steelworkers Union filed an appeal to challenge the decision.

Retread Instead put together a letter that can be signed online and sent to a senator or printed and sent by mail. 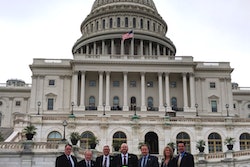