Ray Martinez, who assumed the role of administrator of the U.S. DOT’s Federal Motor Carrier Safety Administration in late February, sat down in an exclusive half-hour interview with editors from Overdrive and Truckers News on Thursday, March 22 at the Mid-America Trucking Show in Louisville.

Topics of conversations ranged from top-of-mind issues like hours of service, the ELD mandate, parking and automation, as well as Martinez’s take on trucking regulations tabled by the Trump Administration, like a sleep apnea screening rule and the speed limiter mandate.

Martinez avoided going into too much depth on any topic, saying he’s still learning the nuances of the industry’s chief issues. However, throughout the interview, he made clear he wants FMCSA under his watch to be an agency with its ear to the concerns of trucking stakeholders. “It’s not an easy position,” he said. “But it is one you have to approach with open ears. I would like to look back in a year and have people say in this industry that he’s listening to us, he’s receptive and he’s trying to make changes that are effective. We understand that industry is not the enemy. The approach from FMCSA [should not be] all punitive. A lot of it needs to be outreach and education, not just writing violations.”

On hours and ELDs

Despite being on the job just a month, Martinez says he already understands a sentiment often expressed by drivers, particularly those who oppose the ELD mandate: “A lot of the issues I’m [hearing] are with regards to hours of service, which are the underlying driver here, I think,” of frustrations with the ELD mandate, he says.

Regarding hours, Martinez says he’s talked with the American Trucking Associations and the Owner-Operator Independent Drivers Association already, though he couldn’t talk specifics. “There are really good suggestions I’ve already heard, but I want to hear more and see if there’s something we can do either within the existing regulations or do we look at changing regs. We’re not there yet; we’re still in the aggressive listening phase.”

Martinez told Overdrive he wants productive conversations with industry stakeholders around hours and ELDs. “In past years, there was a lot of tension and people were not happy. I understand that. Telling us ‘ELDs are terrible’ or ‘hours of service are terrible’ doesn’t help me as a regulator,” he says. “What we’re hoping to hear is good dialogue. Come to the table and say ‘Here’s where we think FMCSA could be helpful.’”

“I’ve got very clear direction from both the White House and [Secretary of Transportation Elaine Chao] that we are to listen and we are to be receptive and to see if there are ideas we can incorporate.”

Martinez says opportunities for easing the parking shortage crisis could lie within upcoming work on infrastructure funding bills, which he referred to as a “front-burner issue.” He also noted the concerns of rigid hours of service rules and how they — and now ELDs — play into problems finding safe truck parking.

“Say there are” drivers who want to “abide by the rules as they exist,” he says, “Where do [they] do it? There’s no place for trucks to pull over.”

Though Martinez says he sees self-driving trucks as “a ways away,” the agency and its sister agencies at the DOT must prepare for the fast-approaching tech, he says. “I don’t have to tell anyone listening that the government sometimes moves a lot slower than industry, but we don’t have that luxury right now. Technology is moving so fast, we have to be focused on it, know what’s happening and be prepared to move with it,” he says.

“People get all excited about self-driving everything. I get excited about the steps that are involved. I’m more interested in gradual improvements in automation that are helping truck drivers today — making them safer and making their jobs easier and safer.”

“I’ve seen them (self-driving trucks). It’s fascinating to see,” he says. “One thing we’ve been directed to do is review all of our regulations and say what would we have to do should these grades of automation come in in the next 3 years, 4 years, 10 years, so we’re not caught flat-footed.”

On sleep apnea and speed limiters

Two regulations tabled last year, both with some momentum under the prior administration, have not yet come across Martinez’s desk, he says. Federal rules to institute sleep apnea screening and treatment regulations and to require use of speed limiters were taken off of the agency’s regulatory docket last year. Speed limiters were bumped to a long-term agenda item, and the agency formally rescinded the sleep apnea rule issued as a proposal in 2016.

“I have not met on those issues,” he says. “I know [they were] hot topics and that there was some blowback, but I think both FMCSA and the Federal Railroad Administration are concerned about health issues that would impact operators’ ability to safely operate, whether it’s fatigue or a medical condition.” 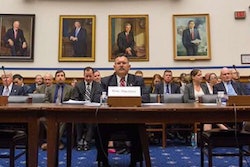