Even as fuel prices ticked up a bit, spot truckload rates dipped again during the week ending Feb. 9 despite higher freight volumes than at this time in each of the past three years, said DAT Solutions, which operates the DAT network of load boards. The number of posted loads and trucks both increased 4 percent last week but rates sagged as a national average for all three equipment types. Freight rates have been in decline since the calendar flipped to 2019, perhaps adding credence to this week’s forecast from analysts at FTR Transportation Intelligence that, at least in comparison to last year, spot rates would lag behind the prior year by around 7 percent.

That’s despite severe winter weather that brought complication to the freight picture — and some hope for rates in the aftermath — for owner-operators. The severe winter weather event that gripped much of the Midwest and Northeast in late January and early February “definitely had an impact” on rates and load volumes, says Peggy Dorf, analyst for DAT, though its impacts were more localized than prior winter weather in recent years, likewise in comparison to major hurricanes seen in late summer and early fall.

The storms and extreme cold and subsequent impacts have also been short-lived, Dorf adds, which minimized its influence on any significant shift in freight movement and spot rates.

Just before and right after the storm hit on January 28, the Great Lakes region saw a spike in rates for inbound loads but a dip in rates for loads leaving the region, particularly if they were bound for the South, she says. “Clearly, you didn’t have to pay a truck as much to leave the region entirely.” Those short-lived spikes are really the only impacts DAT has detected from the storm.

Usually, major weather events cause a surge in load volume and rates for outbound loads, then a stall in both inbound and outbound loads during the event, followed by a surge in both inbound and outbound loads after the storm, with pent-up demand causing the outbound spike and a need to resupply prompting the inbound spike. However, during the late-January events, “it doesn’t look like [those trends] were a big factor,” says Dorf, “because this storm was brief.” And in places like Chicago and Detroit, “they’re used to seeing snow.”

Trend to Watch: Florida Reefers
Punxsutawney Phil crawled out of his hole on Feb. 2 and did not see his shadow, which means we’re in for an early Spring. The sooner the better for reefer haulers, who are shifting their focus to warmer climates after a brutal stretch of cold weather throughout the country. Consider Florida, where it’s still early for citrus harvests but prices are firming up on key lanes out of the state:

Higher prices out of Miami and central Florida likely mean that strawberries, tomatoes, and other mixed vegetables are on the move. —Todd Dills, James Jaillet contributed to this report 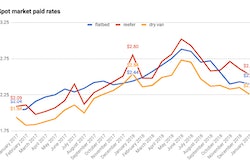 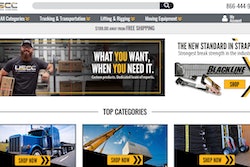