I-255 in Illinois to close for 10 months
The Illinois Department of Transportation will close a section of I-255 on Feb. 1 for a construction project that is expected to last until late November.

During the project, crews will rehabilitate and resurface I-255 between Illinois Highway 15 and I-55/70.

IDOT suggests during the north section closure that drivers use I-64 West to I-55 North back to I-255 to get around the closure. For the south closure, the department suggests drivers take I-64 West into Missouri and taking I-44/55 South to get back to I-255. Vos was traveling on I-335 near Emporia, Kansas, when he saw a fire in the distance. As they got closer, they realized it was a truck and Vos’ wife, Reynette, told Charles she could see someone in the cab. He immediately pulled over and grabbed his fire extinguisher, then he and Reynette rushed over to the burning truck, but the fire was too advanced.

Charles recalls an older man was trying to get into a cab to free the trucker. Two other motorists stopped and rushed over as well, who happened to be an off-duty police officer and his wife, who was a nurse. The officer struggled to cut the driver’s seat belt, then asked Charles to help get the man out. The flames were spreading but hadn’t yet reached the driver’s side of the cab.

“We dragged him up the ditch to the shoulder, maybe 50 yards away,” says Charles. A few seconds later, the truck was fully engulfed in flames. The driver was in respiratory arrest and was bleeding from the mouth. “The nurse and I took turns doing chest compressions as her husband went to grab a first-aid kit,” Charles adds.

Reynette was trying to direct traffic away from the shoulder where they were working on the driver while waiting 40 minutes for a state trooper to arrive. It was another 10 minutes before an ambulance and firefighters arrived. During that time, Vos says the man regained consciousness, but he doesn’t know if he survived or not.

C.H. Robinson’s $225M pick-up the latest in Roadrunner sell-off
Roadrunner Transportation Systems (No. 31 in the CCJ Top 250), trying to right the ship amid lingering financial struggles, announced Tuesday it is selling its warehousing subsidiary Prime Distribution Services to broker C.H. Robinson in a $225 million cash deal.

Prime (not connected to major fleet Prime, Inc.) provides warehousing and retail fulfillment. It’s headquartered in Plainfield, Indiana, and employs about 270 people across five locations. C.H. Robinson says it will integrate the company into its existing Navisphere division.

It’s the third major divestment from Roadrunner in the past four months. The company reported a loss of $266 million through the third quarter of 2019, and has since September downsized its dry van division by 10 percent (about 450 jobs) and sold its flatbed division for $30 million.

The Downers Grove, Illinois-based company operated more than 3,500 power units in 2018, according to data in the CCJ Top 250. 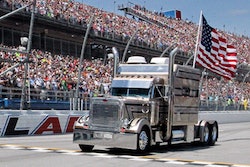