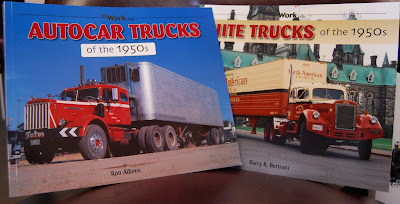 divdivFrom the folks at Iconographix in Wisconsin come two new collections of photography of, respectively, Autocar and White trucks of the 1950s, both out last week. Large-format perfect bound softcover books with excellent photo reproduction quality, the books, says Nichole Schiele of Motorbooks, the primary distributor, says the collections are great for enthusiasts of trucking and automotive history. Both Autocar and White’s roots go back to the origin of the truck as a freight-transporting vehicle, with Autocar pioneering civilian use prior to and during World War II, particularly after much of the worldwide fleet was worn as the war ended. Civilian production began again in full force because of the lack of new trucks.

In 1950, when Autocar introduced the new driver cab, the old louver design was eliminated. The old-style flat windshield sleeper cabs were used up until 1953 (the same year that Autocar was purchased by the White Motor Co.) when the new sleeper cab was introduced. Autocar became the top-of-the-line marque for White and marketing focused primarily on specialized applications, such as construction, logging, mining and oil industries.
White Motor Company, for its part, began as a sewing machine manufacturing concern founded in 1876 by Thomas H. White and expanded by his sons into steam and gasoline-powered automobiles; but it made its own mark in the trucking area offering a broad array of light, medium, and heavy-duty trucks before concentrating on the latter from the 1960s on. In addition to its brand name and Autocar, White purchased and/or marketed a litany of other trucking manufacturers, including Reo, Diamond T, Diamond Reo, Whitehorse, PDQ, Western Star and White Freightliner trucks. White fell on hard financial times and declared bankruptcy in 1980. The named lived on for awhile in the 1980s under the parentage of corporate giant Volvo. This book, by Barry Bertram, reviews White medium and heavy-duty truck models in roughly the decade of the 1950s, including the WC, 3000, 4000, 5000, and 9000 series.
Top Stories