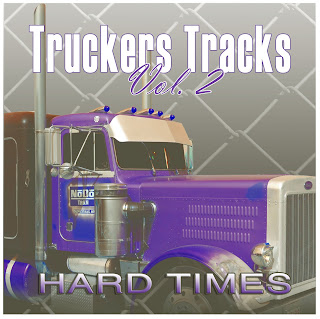 Volume 2 of the CD series Truckers Tracks, dubbed “Hard Times,” is out now from Nashville’s Spec Records, brainchild of musician and producer Doug Jones. When Doug Jones moved to Music City in the 1990s he was following the tracks of his friend Johnny Neel, the famed keyboardist who did a stint with the Allman Brothers starting in the late 1980s. (You might be surprised, or you might not, to learn that both Jones and Neel are blind.)

Neel had “built a recording studio in Nashville” after breaking from the Allmans to go out on his own and “invited me to come down,” Jones says. In the process, Jones felt pulled toward a part of the music business he knew little about, as a player — the business itself. Via the Tennessee Vocational Rehabilitation Center’s services for the blind he enrolled in a music-business program at a local college and learned the ins and outs. The final result is the second of two CDs that began as sound tracks to a few installments of Mark Bush’s North American Show Trucks DVD series.
Check out the lastest in the Truckers Tracks series here, and for more info on the first, “Saddle Up and Ride,” see my blog post from November.
Highlights of the new one include several tracks by Neel and the title track, “Hard Times” by Jones, Dan Cohen and the Levees. “I was feeling it inside when we were going through the process,” Jones says. “This past summer, with the election, fuel prices skyrocketing, truckers driving on D.C., the whole economic picture. [‘Hard times’] was an idea I felt inside and then I brought it to the two guys there — Adam from the Levees and Dan Cohen — I gave them the idea, a hook and the theme and said, ‘Let’s write this.'”
The final track, “Angels Coming Home,” is a tribute to renowned trucking photographer Bette Garber, who passed away late last year.
Top Stories