Trucker of the year 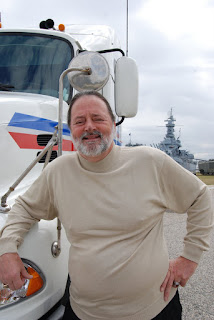 It’s not often a trucker gets the front-page treatment in a mainstream newspaper’s business section, but such was the case for James Loveland, Willie Shaw Express driver and 2009 Truckload Carriers Association Company Equipment Driver of the Year, an award partly sponsored by Truckers News, after Loveland appeared on the cover of our May issue. In a story in his hometown newspaper, the Mobile Press-Register — “‘Outlaw Hog’ top company truck driver” — by K.A. Turner, Loveland makes good on his new status as ambassador to the general public for the profession he loves.

It wasn’t the first time the motorcycle mechanic and enthusiast and truck driver appeared in the paper. Turner tells of the first story, from 1995, which appeared shortly after Loveland and fellow Mobile, Ala.-area bikers, organized via his own Jim’s Cycle Shop, “got together to play Santa for the abused and neglected kids at St. Mary’s Home in Mobile,” Turner writes. It’s a tale recounted in the Truckers News feature by one driver who is, by all accounts, an incredibly dynamic and gracious presence out on the road. Give it read.
Top Stories