So says San Antonio Express-News columnist David Hendricks, finding hilarity in the fact that current transportation secretary Ray LaHood and U.S. President Barack Obama (as they attempt to restart some version of U.S.-Mexican cross-border trucking) both voted against the cross-border demonstration project while in Congress; tragedy in the fact of the hurt U.S. exporters are feeling at Mexico’s retaliatory tariffs, imposed in March when the administration signed the bill that effectively ended the program. 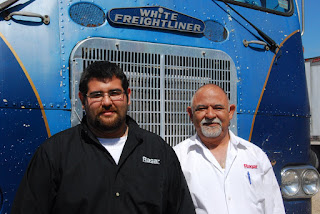 A close-to-equivalent sense of tragicomedy, a prime component of life throughout the ages, no doubt — who hasn’t laughed at themselves to find respite from a personal tragedy? — laced the talk of Ragar Transportation Laredo terminal manager Gerardo Gaona (pictured with his son, Gerardo Jr., with Sr.’s vintage 1971 White Freightliner cabover) on my recent trip to Laredo, Texas. I was gathering reporting on a story set to appear in the July issue of Truckers News, and Gaona, who’s been involved in trucking down along the U.S.-Mexican border his entire life, lent his perspective on competition among drivers, carriers and owner-operators along the border. He saw his father’s Go Trucking business slowly dwindle through the 1980s and ’90s as cross-border transfer carriers hauling southbound freight began to use Mexican drivers, running down the rates.
Then looking back on the downward pressure on rates that deregulation fed the U.S. trucking industry throughout the 1980s and ’90s, from his perspective today, as manager of a terminal that serves 65 owner-operators hauling freight northbound, “Sometimes I wonder whether they aren’t better off,” he said of Mexican drivers and carriers. “The big [Mexican] freight lines don’t want to run in the U.S. It’s too expensive. The rates are too cheap. They have better rates in Mexico than we do here. To go to Monterrey from Nuevo Laredo – 150 miles — is 300 and some odd dollars to the truck. Laredo to San Antonio [approximately the same distance] they want to pay you $200. They don’t want to jump in here and start running. They say, ‘Man, we’ll go broke.’” …
Top Stories