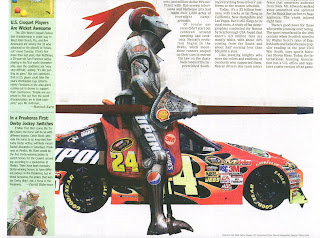 I’ve heard the old “modern day gladiator” description of a NASCAR driver, a comparison that calls up ancient Rome, but Wall Street Journal writer Amy Chozick in May called attention to Northern Michigan University prof Karyn Rybacki’s essay in the book The Sporting World of the Modern South in which she makes a perhaps more valid comparison between NASCAR and medieval joust, “a sport that involves two opponents trying to unhorse each other with a lance,” Chozick writes.

Jousts, starting in France and spreading across Europe, in medieval society drew people from all over the countryside and were festivals of music, dance and other forms of entertainment that rose above just the main event. A typical NASCAR race’s draw from surrounding states for days of camping, grilling and more besides makes the comparison seem apt.

But others disagree — in Chozick’s story, she quotes NASCAR driver Brian Vickers making the gladiator comparison himself, and Yale history prof Paul Freedman “says the aristocratic nature of jousting [makes] it much more similar to a refined game of polo than gritty stock-car racing,” Chozick writes. Dale Earnhardt Sr., though, as Chozick notes, was known as the “Black Knight.”

In any case, thought you’d enjoy the accompanying illustration (pictured here, a combo of Getty/AP/NASCAR images) — some NASCAR team ought to come up with a firesuit built to resemble a coat of armor, I think. You?