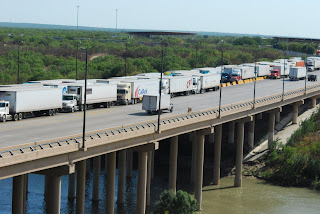 A recent report in the Maktoob Transport Business journal noted a huge hold-up for truckers driving into Saudi Arabia from the United Arab Emirates as Saudi officials reportedly began fingerprinting all drivers coming into the country, allegedly part of ongoing Saudi efforts to stem drug-trafficking.

It was interesting in light of ongoing congestion issues on the U.S. southern border (northbound trucks pictured on the Laredo World Trade Bridge) recently highlighted in a conversation I had with Laredo Development Foundation director Roger Creery. “An interesting visual we try to create for the folks in Washington as we try to help dimensionalize what 12,000 trucks a day [flowing across the border] really means as they enact legislation to do things that, seemingly, wouldn’t take that much time,” at a border crossing, Creery said. For example, he said, “let’s take something as simple as, ‘We’ll look at a driver’s license.’ If that takes one minute per truck, it doesn’t seem like a lot – but if you project that across 12,000 trucks, you can add six to seven hours of delay time at the border. So a one-minute decision by legislative mandate can add that delay time. If you’re crossing 1,200 trucks a day rather than 12,000, not a big deal. But if they’re hauling 53-foot trailers, lined up nose to tail from milemarker one on I-35 [in Laredo] your line of trucks would extend all the way up through San Antonio at milemarker 170.”