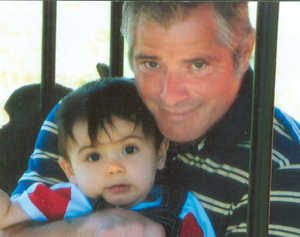 Local refuse hauler Robert Jay Leffer (pictured with his son, Robert Jr.) of Sanford, N.C., is slowly getting better in the North Carolina Jaycee Burn Center in the Triangle area, where he’s being treated for wounds sustained during a January accident when a reckless driver caused his truck to overturn and catch fire on I-40 in the state. The Raleigh News-Observer reported his story last Thursday on news the Leffer family was planning an event and establishing a fund to to assist in his recovery.

Friends and family dub driver Leffer a “walking miracle,” News-Observer staff writer Naureen Khan writes, because at the time of the accident, with burns covering an estimated 80 percent of his body, doctors gave him a mere 48 hours to live. It’s a testament to persistence, and one you might take to heart. For information on the Leffers, read Khan’s story here.