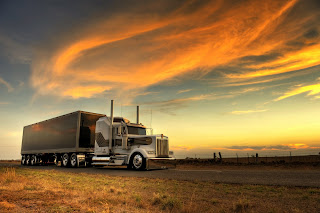 This 1989 Kenworth W900L is one of a few built and painted to resemble a KW used in the filming of the James Bond flick “License to Kill,” brought back up to pristine condition and customized by the folks at Klos Custom Trucks in Geelong, Australia, and photographed by Truckers News Photo Group member and down-under trucker Robbie Rose. Rose now also freelances as a photographer for the biggest trucking magazine on the southern continent, Truckin’ Life. “This long-wheelbase W900L would easily be the most unpractical truck in Australia!” he says of the tight lanes in Australian towns. “Even bobtail it takes 2 bites to get around most round-a-bouts… But it’s the price to pay to be cool.”

Rose is somewhat infamous as DingosGotMyBaby on YouTube. “I tried to ditch the name but it stuck,” he says. “I was posting quirky little truck videos and one day I thought to myself, if I join all these videos together I could probably make some sort of job resume out of it.” Little did Rose know, but it turned out he was probably the first truck driver to do anything like this, showing his prowess in backing double and triple tanks and negotiating those roundabouts. The video has since received upwards of 560,000 views and his story picked up by local and national media of various sorts.

Give it — and a pastiche of scenes from the Klos boys’ recreation of the 007 Kenworth — a look below.