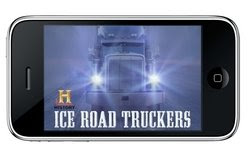 The Truth About Trucking folks don’t have the only truck-driving-related app for the iPhone anymore: the folks behind the ‘Ice Road Truckers’ television reality drama have released a lite version of their own app (out in full version June 28), which admittedly probably isn’t of much use to you as a diversion or much else. The ice-road app engages users in a game that is your daily reality — trying to beat the clock on the highway to make time and money. “The app calls for you to manage an 18-wheeler truck and see if you can get it through icy arctic roads and deliver your haul,” say the reviewers at Mobilewhack.com. “This will be timed of course and obviously, the best time wins.”

Since I wrote about memorials to drivers at the Hilltop Truckstop on the Alaskan ‘Haul Road,’ or Dalton Highway, in February, the new season of “Ice Road Truckers” has picked up on the theme. My colleague at Overdrive, editor Max Heine, had a little more to say about it over at the Overdrive Extra blog last week. Heine rode along with one of the stars of the new season, George Spears, in 2006 on the Haul Road , and to his eyes the first few episodes this year are giving short shrift to one of the highway’s most interesting attributes, its history. The same goes for that of the drivers. Heine’s post memorialized one of them he met when in Alaska, Dale Harris (pictured on Heine’s blog). As Heine puts it: “Perhaps subsequent episodes will prove me wrong, but it will be a shame if the History Channel series, which so far seems obsessed with truck wrecks, doesn’t show that many of these drivers, like Harris are multi-dimensional people. They can do a lot more than navigate a hazardous road.” Read on here. Or check out Heine’s account of his run with Spears on the Haul Road here.