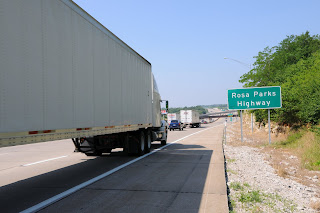 When the Springfield, Mo., neo-Nazi National Socialists group moved to adopt a section of the West Bypass around the town from Farm Road 142 to West Sunshine (and thus have their organization’s name plastered on signage along the road), state legislators exercised a tactic they’d employed before, as evidenced by this “Rosa Parks Highway” sign on a section of I-55 in the state (thanks, Missouri DOT, for the picture). They voted to dedicate the National Socialists’ adopted half-mile of highway to the memory of Rabbi Abraham Joshua Heschel. Rabbi Heschel was the Jewish clergyman famous for taking up the cause of the anti-segregationists led by Dr. Martin Luther King Junior. He marched with King and others in Selma, Ala., in 1965 and elsewhere. Read more in the Kansas City Jewish Herald here.

The story of the naming of the Rosa Parks Highway dates back to a 1994 first attempt by the Ku Klux Klan to adopt the I-55 segment, south of St. Louis, a move that was challenged and made it all the way to the U.S. District Court, where it was found that Missouri’s efforts to avoid allowing the Klan to participate in the adoption program were unconstitutional. By the time court battles were finished in 2000 and the signs went up, though, the legislature had moved and renamed the highway after Parks, a driving force behind the landmark Civil Rights-era Montgomery bus boycott demanding equal treatment for the races. And as noted on the Snopes.com page for this more-than-apocryphal tale, the Klan apparently never followed through on their pledge to adopt and thus actually clean up this section of highway, so their signs were removed. The Rosa Parks Highway signs, though, remain to this day, a reminder of past battles. Pull the horn next time you pass them, perhaps, a little gesture to acknowledge our great nation’s history.