Optimus Prime returns flame-heavy as ever

Fans of classic big rigs, the first Transformers movie or both may be thrilled to find out that Autobot leader Optimus Prime returns to Earth in heavy metal as a blazingly blue Peterbilt with hot-red flames in his summer’s sequel, “Transformers: Revenge of the Fallen,” to save Sam Witwicky from the evil Decepticons. Peter Cullen is back as Prime’s voice, along with most of the original cast, with Shia LaBeouf as Witwicky and Megan Fox as tantalizingly cute and car-smart girlfriend Mikaela Banes.

It may seem like kid-stuff to New York Times film critic Manohla Dargis, but for some aficionados, the iconic truck is worthy of big bucks. Nearly two years ago, an Optimus Prime Peterbilt replica (pictured) sold on eBay’s Canada store for $50,000, reported blogger Conrad Quilty-Harper on the website engadget.com. “The seller converted a 1994 Peterbilt into Hollywood’s version of Optimus, complete with blue and red flame point job, dozens of chrome switches, and a 17-inch entertainment system floating above the bunk in the back (and yes, the bunk has those Transformer sheets you had when you were 10 years old),” Quilty-Harper writes. 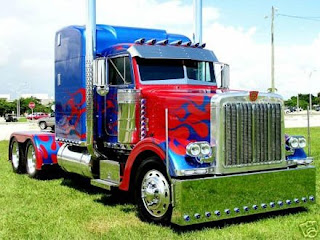 To get all the gyrations and reconfigurations in Director Michael Bay’s crash-bang adventure film, truckers will have to park their big rigs at the back of the cinema lot — if the owner doesn’t object, of course — and relive their own childhood dreams and memories of making a rig’s metal flash and engine roar. –Lucinda Coulter