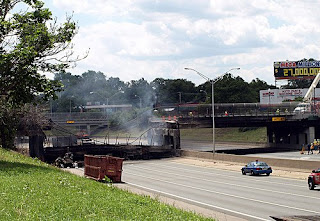 Thursday last week a pretty common thing with uncommon results happened on I-75 on the “9-Mile Curve” section through Detroit. A wreck ended up destroying a Honda Civic, a tractor pulling a tanker, another tractor-trailer and a large section of bridge over the freeway, which succumbed during the subsequent fire. As the Detroit Free Press reported the story, “Saied Haidarian-Shahri, 27, of Clawson, [Mich.,] who’d just received his license in May, apparently lost control of his car while driving about 70 m.p.h. in the 9 Mile curve on I-75, which has a suggested safe speed of 50 m.p.h., police said. He swerved into the tanker truck, driven by Michael St. John, 44, of Armada.”

Both truck drivers escaped unscathed, thankfully, and Haidarian-Shahri suffered only slight injuries, but it wasn’t a miracle. Police told reporters that expert maneuvering by both experienced truck drivers kept the disaster from becoming something far worse.

The National Transportation Safety Board has chosen to investigate this crash, according to the Free Press, so we may well hear more about it in the months to come.