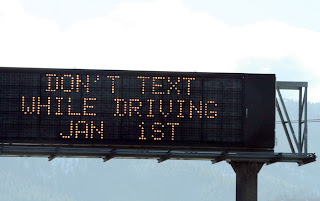 In the wake of the publication of results of the Virginia Tech Transportation Institute’s analysis of long-haulers’ texting behavior while driving, the calls for a nationwide ban on the practice have now reached the metaphorical level of deafening, one might say. It’d be pretty easy, thus, for you to have missed a somewhat timid announcement from the U.S. Transportation Secretary, Ray LaHood, Tuesday that gave little detail about a supposed “summit” late in September dedicated to the topic of distracted driving.

We’re all for highway safety, and a ban on texting while driving might well be a good prohibition if it would help cut back on the number of accidents, but as one of my colleagues asked, is a distracted driving summit with a Twitter page not something of an oxymoron? For updates about the Summit, the RITA page for it says, you can visit twitter.com/distractdriving. Go there and take note of the first two entries, or tweets, sent via the “mobile web” (a cell phone or PDA of some sort, in other words). Would it be in bad taste to ask whether the tweeter was driving when the entries were sent?

One would hope not.
pAs for the likelihood that the summit will happen, consider that, last time to my knowledge LaHood publicly mentioned the U.S.-Mexican cross-border trucking program, in May, he said there would likely be a resolution to the dispute over the program by the end of June. If you call inaction, and silence, a solution, then problem solved./pp