Honor and goodwill in a placemat 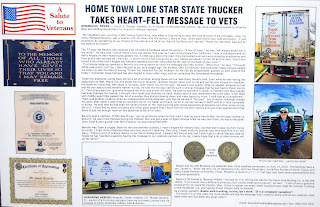 Independent Amarillo, Texas-based owner-operator Buster Beverly Jr. designed the placemat pictured here to cover a circumstance that became increasingly common after he and High Plains Tire amp; Diesel in Amarillo began to turn his trailer into a rolling “thank you” to returning vets of current U.S. wars and other survivors of battle. He tells the emblematic story of a Vietnam vet who saw the original message lettered across the back of his trailer and made a comment about it while the two were adjacent each other on a fuel island: “He says, ‘I’m a Vietnam veteran. I saw the sign on the back of your truck and the POW sign struck a chord with me.’” In all such cases, as in this one, Beverly then proffers the placemat, something for the vets to remember him and other well-wishers by. “Every one of them comes back with a smile,” he says. Write him at beverlystrucking@sbcglobal.net.