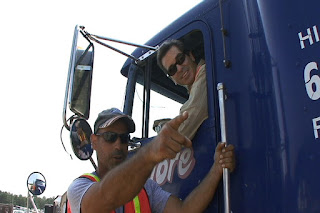 New York PBS station WNET correspondent Miles O’Brien (pictured, right) recently went through the motions of learning to drive a tractor-trailer at Shore Tractor-Trailer Training in New Jersey. He wasn’t out to probe the intricacies of training or the flood of new trainees from other industries in a down economy, though. His piece in the Blueprint America series, which airs this Friday on the NOW program on some PBS stations, is about the freight-movement prioritization debate over whether to continue public efforts toward maintaining and expanding highway infrastructure for trucks or to refocus efforts on rail capacity.

As the show’s producers put it: “…as Congress begins a major rewrite of the nation’s transportation laws, many are asking whether is it time to redirect freight traffic off congested highways onto more environmentally friendly and fuel efficient trains. Sounds good, but there’s a catch. Unlike highways that receive public funding, railroads are private. Should taxpayers sink public money into a private railway system? And where should the money come from–the
highway trust fund? Truckers who pay the lion’s share into that fund say, ‘No way.'”
Let’s hope O’Brien talked to some haulers who’ve long since graduated from the school of experience, not just second-career trucking aspirants and others just starting out. Tune in Friday to find out. The segment will also be viewable at the Blueprint America main site.
Photo courtesy WNET.ORG/Andy Fredericks.
Top Stories