Trucks ‘Made of Gold’ by Hawaiian owner-operator 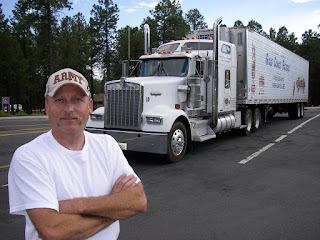 When we wrote about country singer Leland Martin in July and his partnership with the Owner-Operator Independent Drivers Association to raise money for care packages to send to U.S. troops stationed overseas, little did we know that Hawaii resident (though he runs the lower 48 through most of the year) owner-operator Howard Salmon’s These Trucks Are Made of Gold record was likewise part of some 600 of the care packages. The CD, out now (details for ordering are here), is classic country, featuring poet and storyteller Ron Terry as well.

“I’ve been working with music since 1980,” Salmon (pictured) says, “when I was in the Air Force. I started writing music about 15 years ago and now have decided to play my hand in it. I wanted to get my songs recorded right so someone would pick them up. DJs liked them, and said, ‘Why don’t you do it yourself?’ It’s a very positive thing in my life.”

Doing it himself is something Salmon is well used to — he runs a 1999 Kenworth W900L pulling a reefer under his own authority and focuses a laserlike attention to the details of his operation.

Visit him — and sample some of his music — at https://www.howardsalmonmusic.com/>.

A Trucker Buddy video with his “Who Would They Look Up To?”, written for a niece and nephew originally, follows, with opening commentary. Enjoy.