Todd Dills
Oct 7, 2009
That’s right: it’s just a hash mark away from DWI, and according to DOT, reaction times are roughly equivalent to those of a driver at the 0.08 alcohol limit.
A study by the online electronics retailer and product-review site Retrevo puts the share of automobile drivers who frequently “text, use Facebook, or Twitter” while behind the wheel at a minuscule 7 percent (a more likely accurate 34 percent of drivers said they do it “sometimes”). If you’ve been in a big truck anytime during the past year or so or talked to a trucker about the practice among four-wheelers, though, you’d know this to be one of those situations where the survey wasn’t up to the challenge of the times. Justifiably, texting behind the wheel is now approaching the level of social unacceptability of things of the nature of smoking in hospital waiting rooms. Honestly now, would you tell anyone if you actually did it frequently? 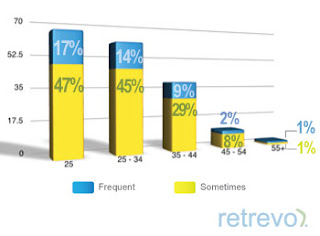 In any case, the Retrevo survey results are here for those interested. Among the more interesting parts of the blog post are breakdowns of respondents by response and the kind of phone they use, as well as their age (see graph at right). The most likely culprits among DWTers are smartphone users, particularly iPhone users and, of course, the young and the reckless. . .