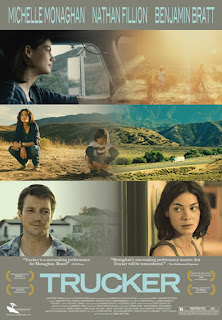 Friday, Oct. 9, is the release date for “Trucker,” a so-called “small indie film” that thus will see a limited release, but perhaps it’s in your area. The press for the movie, at least as run with in many outlets, traffics in some stereotyping — “Michelle Monaghan is transformed from a hard-drinking, hard-living trucker” into a mother, said one online entertainment-show host, for instance, as if the two were impossible to contain within the same person and pigeonholing the lot of America’s hardworking haulers — but the reality of the flick’s story seems more broadly realistic and is, after all, a quite specific story about one young woman’s journey to come to terms with motherhood.

See, for instance, the interview with Monaghan at LatinoReview.com conducted by Dave Gonzalez and published yesterday. Monaghan went the extra mile with writer/director James Mottern shooting the flick, spending a great deal of time in truckstops around the nation talking to drivers and getting a feel for the road. She even got her CDL, she tells Gonzalez, and at one point adds that she misses the feeling of life out on the road.
I haven’t seen “Trucker” yet, and so will reserve judgment for later, but here’s hoping that its title is not meant just as an evocation of old stereotypes but an explosion of them, moving beyond stock portrayals to capture the more bittersweet reality of family life and the road.
You can watch the film’s trailer here.
Related Stories