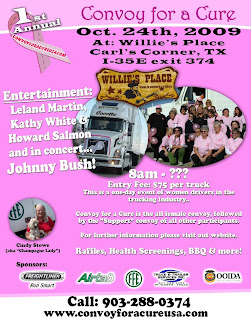 In all the effort spent to get to the reality of one particular independent owner-operator’s business and life as a musician, I somehow missed one important detail: Overdrive October Trucker of the Month Howard Salmon, whom you’ll remember from this post from last week, is performing live at the Convoy for a Cure for breast cancer event at Carl’s Corner truckstop (I35E exit 374 in Carl’s Corner, Texas) October 24. Click on the poster for further details.

Also appearing at the event is Channel 19-featured artist Leland Martin, whose “Truckers for Troops” record, along with Salmon’s “These Trucks Are Made of Gold,” was this year included in OOIDA’s care packages for U.S. troops stationed overseas. As for the Convoy, an all-female lead convoy followed by a support convoy open to both sexes, see my recent post about its Canadian origins.
Related Stories