That great vinyl sound — in the cab 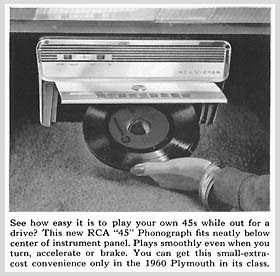 Ever wished you could dust off those earthy old Hank Williams 45s your dad left you and take them for a spin pulling produce cross-country in the old Pete? And, of course, actually listen to them? For a while in the 1950s, then again in the early 1960s, the folks at the ookworld.com site tell us, spinning vinyl in your car at least would have been possible care of the Highway HiFi company’s specially-designed machines and platters for playing on-road. They were a factory option in the 1956 model Chrysler Corp. vehicles (Chrysler, Dodge, Plymouth, DeSoto, Imperial), but they had their problems, it seemed, and were discontinued just a couple years later. And attempt to resurrect the players and make them capable of playing standard 45s in the early 60s likewise quickly failed.

For a fascinating mini-documentary history, complete with Chrysler and Highway HiFi press materials, vintage advertisements, and more, visit this page.