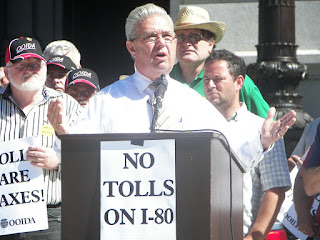 News surfaced last week that Pennsylvania had once again applied for federal approval to add tolls to I-80 within the state’s borders under a pilot program for tolling existing interstates (as a means of road funding when all other options for road rehabilitation were exhausted). The Pennsylvania Fifth District congressional seat, formerly occupied by John Peterson (pictured, flanked by OOIDA members at a 2007 rally in Harrisburg, Pa., on the state capitol steps after the initial application to toll I-80 was submitted), is still the main base for the anti-tolling crowd, as evidenced by the release below, sent out by current seat occupier Glenn Thompson, a Republican.

For more background on what is the third attempt by Pennsylvania in as many years to gain the necessary federal approval to go ahead with the project, which as it stands is codified in state law under Act 44 in apparent contravention of federal rules on interstates, minus the tolling approval, see my stories attendant to the Overdrive “Worst Roads” surveys (in which I-80 in Pennsylvania perennially ranks quite high) from 2006, 2007 and 2008.

Also, Fed-Ex White Glove owner-operator Phil Madsen says his current thoughts about the tolling in I-80 are unchanged from this post he made to his blog in 2007, where he ponders some of the misinformation spread then about trucking’s impact on the state’s roads.

Act 44 tasks the Pennsylvania Turnpike Commission with providing annual lease payments to PennDOT in exchange for operating I-80 as a toll road. This new application attempts to alleviate concerns addressed by FHWA in a September 2008 memo, which blocked the joint application from moving forward.

“Act 44 has been a dice roll from the beginning. The Governor knew this, the Legislature knew this, and the Turnpike Commission knew this. All were complacent, as they sat back and allowed the Turnpike to borrow and spend almost $2 billion since July 2007, without any guarantee of repayment.

“After an initial review of the financial analysis, it expressly states that I-80 traffic patterns have uncertainty to them once tolls are placed on the Interstate. Any diversion, which is not addressed in this application, will have an effect on revenues and will jeopardize future highway and bridge funding,” Thompson said.

Additionally, and perhaps most egregiously, Act 44 does nothing more than double the size and scope of the Pennsylvania Turnpike Commission. “This is the same Turnpike Commission that has been the backdrop for several scandals and a slew of indictments. Act 44 is a cover-up of years of mismanagement of taxpayer funds and the perpetuation of an antiquated and corrupt Turnpike Commission,” added Thompson.

“This is not fair to the taxpayers in Pennsylvania—not just along the I-80 corridor, but in the Commonwealth as a whole,” said Thompson. “This is about good government, not politics as usual in Harrisburg, the taxpayers in Pennsylvania deserve better. I have been in close contact with the Federal Highway Administration and plan to meet with them to voice my opposition. I look forward to working with my colleagues here in the House, who recognize the multiple flaws in this plan and remain committed to keeping I-80 toll free.”