From outside in: Top 10 things learned in a rig on the highway 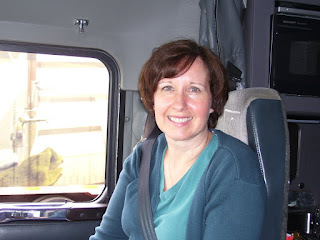 Joan Duggan Connell (pictured) penned this lead letter in the Speakout department of this month’s edition of Overdrive. While we had to run it in short form due to space limitations of the section, for my money its original form is worth some additional attention, likewise the unique character of its author. Connell’s more an office type than a trucker, with 20-plus years under her belt as a paralegal and with various nonprofits. But last year, she began taking opportunities to join her owner-operator husband Vince (leased to Clark Transfer and hauling Broadway shows) on the road for three- to four-week stretches, during which she located a newfound appreciation for the Highway Knights that are American truck drivers, about which (partly) she’s now writing a book. The book, she says, “shares what I learned about trucking, how beautiful I found our country and of course [Vince and my] relationship on the road. It includes additional stories like the ones I have shared, as well as tips for four-wheelers on how to better share the road.

“How I came to write the article and my book is easy,” she adds. “Driving a semi is hard work. When I first started out with Vince, I thought it would be fun and easy. We would drive for a while, hang out at theaters, then drive again. How hard could that be? Then I got to my first multi-truck load out in Portland. The day of the load Vince told me we needed to sleep during the day because it was going to be a long night. I thought, How long could long be? 2-3 a.m.? I could be up that long. So I worked on schoolwork instead of sleeping, as I was finishing up my MBA. Well, let me tell you, a long night meant until 9 the next morning. I fell out of contention and went to bed around 2:30 a.m. just to doze, of course, while Vince and the other five or so drivers stayed up. The sad part was that after talking Vince into breakfast before going to bed that morning, I slept as long as he did despite my napping.”

Then, she says, there are the four-wheelers “cutting us off and trying to go around us when we are trying to turn,” which will be familiar, of course, and which drove her crazy. “One of my favorite moments was in Seattle when a woman ran into a show trailer legally parked on the street. She ended up doing a lot of damage to her car. Now I ask you, how does someone hit a 53-foot parked trailer? These are the types of things drivers put up with all the time, but then they get the bad rap in the media.”

That right: file this one under emsalutes, folks, counting down to liftoff…

10. You must always exit a semi truck backward. (No matter how many times I tried to find a more graceful way, it didn’t work.)

9. People actually run into 53-foot trailers parked on the street.

8. How to direct my husband with a two-way radio into a parking spot during a snowstorm (not as easy as you might think; telling someone to turn right or left doesn’t work as well as “give me more passenger or driver side”).

7. Chivalry is not dead. It is alive and well in truckstops across the country. (More doors were opened for me and I was treated nicer in the truckstops than any office building I ever worked in.)

6. How an air dryers, kingpins and steer tires work on a truck. (This is only a tip of the iceberg in terms I now understand.)

5. Truckstops are nice places — clean, safe, the showers actually full-fledged bathrooms — and many of the employees go out of there way to be nice. (Also, the menus in the restaurants there have improved over the last year.)

4. Night driving is not as easy as it looks, but watching the sun come up is amazing. (No matter how much sleep I got during the day I never quite got the hang of it, but my husband is amazingly good at it.)

3. Truck drivers make maneuvering a tractor-trailer through rush hour traffic in LA, over mountains and through pouring raining and snow and backing into small loading docks look much easier than it really is. (I watched my husband and other Clark Transfer drivers put trailers in theater docks that most car drivers would have difficulty backing into.)

2. Nobody beats a truck driver’s office for the view. (Seeing the landscape of our country through the windshield of a semi is way better than doing so from a plane, car, van or SUV. And the view changes daily. No executive can say that.)

1. Driving a tractor-trailer is a tough job, and those who do it every day so we can have food, clothing and be entertained don’t get the credit they so dearly deserve. (Truck drivers are away from home for days, weeks and even months at a time and maneuver through traffic and construction zones while being paid by the mile. My thanks to all these men and women: you are awesome in my eyes!)