Trucking stars on the rise through running — and talking

In October, Truckers News Editor Randy Grider wrote about the extraordinary saga of one Jasmine “Jazzy” Jordan, a 16-year-old Olympic-caliber runner who began a cross-country run Sept. 1 to bring awareness to the difficulty many truck drivers experience in obtaining proper health care. This month, she was a guest on boat hauler and internet-radio host Daniel Audet’s Truckstar Radio call-in show, running most nights from 8 EST (for live-listen 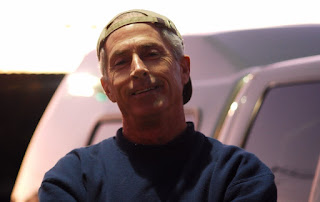 link click here). “As the story goes,” Audet (pictured) summarizes, “Jazzy’s dad has a small trucking company and a pilot car company. One of the female drivers for his pilot company came down with cancer and it ended up taking her life.”

She hadn’t had insurance, as Grider told the story, and the St. Christopher Truckers Development and Relief Fund stepped in and helped her family wth bills. “Jazzy’s dad did as well,” says Audet. “And Jasmine was so affected by this, and realized that many truckers do retire with nothing after decades of service.” She put off her Olympic training and decided to do a cross-country run to bring light to the health care situation among truckers.

“As she was telling the story” on Audet’s show, he says, “I stopped her and asked her, ‘Why would you do this?’ – and I know that’s one of those broad-stroke, borderline obnoxious questions. But a lot of people wouldn’t understand why a 16-year-old who’s probably blowing off her spot on the Olympic team, why would she do this for truckers?

“She said, ‘I want as much publicity to this cause as possible, because there’s a lot of drivers out there in need.'”

That advocacy for the well-being of others in the industry is one he sees playing out not only in the health arena but in relation to several other trucking issues, including driver training and the congestion/lack of public parking facilities. And in each case, he says, it’s women who are leading the charge. “Here we have Hope Rivenburg bringing Jason’s Law to the national forefront. We have TruckerDesiree bringing another issue in driver training to the national forefront. And here we have a 16-year-old running from California across the country for health.

“Let me ask all you veteran trucking cowboy superheroes out there, Where have you been in these situations? Superman, where are you? That night with Jasmine, I said, ‘Some of you veteran drivers out there can step up to the plate here and talk about some of these issues in trucking, and with your experience, it’s sort of a waste that you’re not.'”

Jazzy’s trek has covered more than 600 miles so far. To stay updated, follow her via her website or on Twitter.
Some of those veterans Audet called out got their opportunity to speak on issues recently via an unlikely venue, Dan Rather’s HDnet follow-up to his previous, controversial show on driver training. In a roundtable format, he presented many different points of view in an hour-long program. It’s embedded below, but if the vid’s not working, you can check it out via askthetrucker.com.
Related Stories