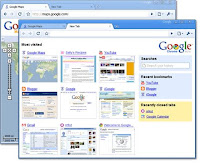 Attendees of and participants in Overdrive‘s Pride amp; Polish truck beauty competitions — or readers of our new Custom Rigs magazine — might have raised an eyebrow or at least ground a gear or two at the news of the name of Google’s proprietary browser, now officially out in an open-source beta version for Windows Vista and XP users. “>Google Chrome,” as it’s called, seems to reflect the prevailing “less-is-more” trend in custom-truck design, with its search and address-box functions integrated into a single “OmniBox” and its customizable, minimal front page. Some tech bloggers speculate, though, that the “Chrome” name is less a direct appeal to hot-rodders and custom truckers than it is a cheeky jab at Microsoft, who’s indeed bling-like operating system enhancer “ChromeEffects” was spiked weeks before a scheduled release back in 1998 — that is, according to the folks at the UK’s PCAdvisor site, who say the plugin had a “>name so flashy that it appears more show than substance.” And, yes, they say that about Google Chrome, too, more or less. Makes you wonder what they might think of the Chad Blackwell Legacy Pete.
Top Stories