‘Somebody’s $%! could get whupped over this’ 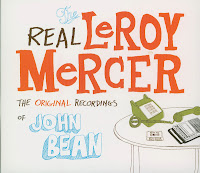 divMade in the late 1970s and early ’80s and popular the nation over with “truckers, country stars…record shop employees” and many a teenage boy, the prank calls on the formerly underground “Redneck Tapes” — now officially “The Real Leroy Mercer,” recently issued on CD by Nashville’s Dualtone Records — were the work of Knoxville, Tenn., resident John Bean. Cured of Hodgkin’s as a teenager, Bean again suffered from cancer, allegedly brought on by his prior radiation treatments, in his early 30s. He devoted the final years of his life to good times, and these recordings are pure evidence of it. Don’t confuse Bean with his many imitators, as his psychologically manipulative, wildly comic genius spawned a veritable industry of imitators, from the Jerky Boys to radio jocks Lee Roy Mercer and Roy D. Mercer, whose names pay homage to Bean’s most famous telephonic pseudonym. He used it on his call to Knoxville’s Thom McCann shoe store looking for restitution for a pair of boots he’d recently bought and which “got wet, folded up and it looks a damn dog’s been eatin’ on ’em.” Similar quests for “retail justice” dominate the disc.

My first copy — and this will date me — I got from a friend when a ten-year-old in the mid-80s in Rock Hill, S.C., and it included only the trinity of “whuppin” calls, to Knoxville-area Eddie’s Auto Parts (wherein “Roy Morgan” demanded a new motor for his car after an oil filter he bought there failed), Camp;C Auto (wherein “Morgan” sought restitution after a bent rim left his tire bald and his alignment totally out of whack) and the previously mentioned Thom McCann call from LeRoy Mercer. The tape had clearly come a long way, its inherent fuzziness compounded by some joker who’d recopied the tape in such a way that every choice line Bean delivered repeated numerous times. My brother and I got no shortage of our own stories out of it over the years, such as the one in which my father walked in on us listening to it. He did not approve. Oops. . . .
There’s a video saluting Mercer — produced by Atomix Films a few years back and featuring none other than Jeff Foxworthy, singing the praises of Bean’s genius, as well as several of the folks he called, and friends — out on YouTube if you’re interested.
Top Stories