What’s the strangest thing you’ve seen on the road? 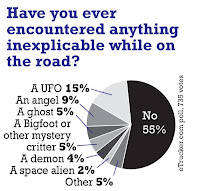 This thread on Prime’s driver forum is more than a little hilarious, we do say (go, Prime drivers!), particularly in light of our recent Bigfoot post. The Prime forum thread details various strange things seen on the road, including a nugget from our neck of the woods: Brian Baine notes, “>You can’t beat seeing the 60+ year old lot lizard at the Flying J in Birmingham, AL.”

In the Channel 19 column upcoming in the October Overdrive, with a version of the Bigfoot post we ran results of a recent poll of etrucker.com readers (pictured) that detailed truckers’ experience with the supernatural on the road — the most surprising conclusion was perhaps the 5 percent of respondents who’d seen a “>Bigfoot or other mystery critter” out there. Tell us what you’ve seen: tdills@rrpub.com.

Anyhow, here’s a few more gems from the Prime thread:
**”>I saw a guy playing the clarinet (both hands) and driving with his knees. He passed me doing 70.”
**”>Had a man and woman on a motorcycle come around me yesterday pulling a trailer. This was not just any trailer, though, it was a pearly white casket. Yep, a casket! They looked up and me just a-grinnin’ as they went by….”