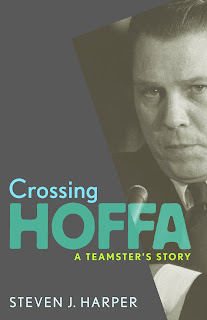 When Overdrive magazine was founded in the early 1960s as a fledgling magazine for the independent owner-operators of the American trucking industry, the Teamsters union was at the zenith of its power on the national stage as a labor union representing mostly company truck drivers. One of them, Jim Harper, found his calling behind the wheel of a 1950s-era Autocar, as his son Steven tells it, when he became a union driver for now-defunct Werner Transportation in Minneapolis. When Jim died, in December of 2001, he left behind a box of keepsakes that held a mystery for his son. Among the various items was a large sheaf of documents and newspaper clippings from Jim’s days as an over-the-road Teamster driver in the late 1950s and early ’60s. Steven describes the lot as a “pretty good roadmap” through what he would later realize was Jim Harper’s fight to clean up corruption at Minneapolis-St. Paul Local 544. That story makes up the bulk of Steven’s book Crossing Hoffa: A Teamster’s Story, which documents the lives of both his father and the long-disappeared Teamsters president Jimmy Hoffa and the fateful intersection of the two in Minneapolis in 1961. It was released last year in hardcover (Borealis Books) and earlier this year in audio format (Spoken Books). It’s a gripping read, its plot climaxing as Jim Harper leads a group of rank-and-file drivers to a vote of no-confidence in his Local’s leadership in spirit with president Hoffa’s public pledges to clean up the union. What Jim doesn’t know, however, is that the president is working all the while behind the scenes to sabotage the vote entirely. Its riveting historical narrative is definitely worth a read — or listen, as the case may be — a fascinating window into a different time.