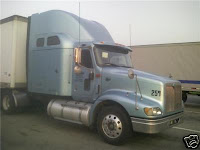 No, it’s not a nationwide fuel reimbursement plan, rather a novel approach to ad sales. Hauler Patrick Kane has put his International tractor’s exterior space (pictured) up for bid on eBay for presidential ads “>in the Key States of Ohio, Penn, and New York, plus other east coast states,” as reads the post. He also “could be willing to concentrate on certain states if desired.”

He starts at a low-bid limit of $7,000 for “>graphics to be displayed on the truck, both sides available, including the top, too.”
The goal? “>Asking price is an Auxillary Power Unit (APU), which is priced around $7,000.00 installed,” Kane writes. “This APU is required in some states such as New York, which have no-idiling laws for trucks when parked for the night, or unloading.” In the time-honored advertising (and political) tradition of exaggeration, Kane says an APU will save him “$20,000 a year in diesel fuel, about 5000 gallons a year saved.” He’s not that far off, though, definitely closer to reality than many of the candidates’ promises.
Top Stories