Casualty of the day 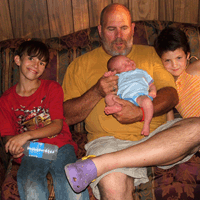 The health-care advocates folks at GuaranteedHealthCare.org, a project of the California Nurses Association and the National Nurses Organizing Committee, last week highlighted the story of Dallas-based owner-operator Lyle Schiele (pictured), who lost his health insurance after illness led to surgery led to downtime and loss of a lease contract. “>In February 2006,” Schiele wrote as part of the organization’s “Health Insurance Casualty of the Day” series, “I had some minor chest pains. Doctors found clogged coronary arteries and treated them with stents in two locations. As a result of this diagnosis and treatment, I was medically disqualified from trucking for 90 days. As a contractor, I wasn’t covered by COBRA and therefore lost my health insurance.”
div

divAfter his surgery, back at work as an independent owner-operator and in the market for insurance, he couldn’t find an insurance provider that would take him on, due to his pre-existing condition. “>I sold my truck and went to work as a driver with a company, primarily for the health insurance benefit,” he wrote. “I was not looking for a handout. I don’t mind paying my own way. But I am no longer given that opportunity. The ‘American Dream’ of owning and operating one’s own business and success based on one’s ability and performance has been taken away. Because of the health insurance issue I can no longer operate as an independent again.”

divFor more on the health-insurance and cost issue, check out the story in Overdrive’s August issue, and our sister magazine Truckers News’ January 2008 feature on health insurance. For a round-up of where the presidential candidates stand in relation to trucking, visit this page.