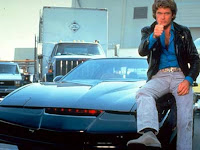 With the late-September announcement of an impending second season of NBC’s Knight Rider television actiondventure show, after the 1980s show of the same name, a flurry of hunting activity has been ongoing at Overdrive HQ. We wondered: Where’d the auto carrying rig that the original show utilized, with Michael Knight’s K.I.T.T. car “>disappearing” up its rear robotic ramp often at highway speeds, come from? While we weren’t able to get a definitive answer, we did find a quite entertaining little episode from the Discovery Channel’s MythBusters series that was devoted entirely to tractor-trailer-centric myths, chief among them the hosts’ successful attempt to prove that running a 1980s-era sports car (they used a Camaro, though the original K.I.T.T. was a Pontiac Trans Am) up a custom-designed ramp into a van trailer at highway speeds was actually possible. No one was killed in the successful demonstration, fortunately, and don’t try it at home, folks.

Gary Mednick, NBC Universal’s P.R. man for the new show, says not to suspect a rig in Knight Rider‘s new incarnation. “>The producers have talked about it,” he wrote us, “but due to various factors, have not moved ahead on anything at this early juncture.” They’re only 12 episodes into season 1 at present. Now if I could only queue the original show’s theme. . .

Other bits in the Mythbusters episode, which aired in summer 2007, include:
1. An investigation into whether an exploding truck tire carries with it sufficient force to result in some of the more wild estimates of possible damage, including decapitation (answer: yes).
2. An unfortunate proving of hypermilers’ claims of higher gas mileage in the draft of a big rig on the freeway.
3. Conditional proof of the same practice’s energy-saving characteristics when the four-wheeler drafting the rig is not a four-wheeler at all, but a two-wheeler.
Top Stories