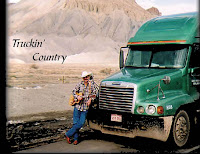 Cliff Douglas doesn’t call himself “Guitar Man” on the CB for nothing. The 49-year-old former long-haul driver, based near Vail, Colo. — now a driver for the Colorado DOT — this summer released a batch of inspired tracks on his “Truckin’ Country” CD (http://www.cliffdouglas.com/>). “I did love Jerry Reid,” he says of the famed “East Bound and Down” singer, who passed away Sept. 2 this year. “I got to see him at the Fresno, Calif., fair in 1982…. He came out and thanked the sound folks and his band and then told the crowd, ‘If anyone is here expecting any rock ’n’ roll you might as well go now, because we’re gonna play guitars and hillbilly music.’ And he counted the first song off 1-2-3-4 and they kicked our…” Well, says Douglas, you guess the rest.

This item appeared in the November Overdrive magazine — visit Overdrivedigital.com to read the digital magazine or subscribe.