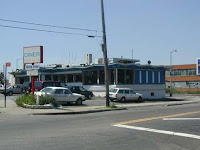 The Clinton Diner, an inner-city Queens spot made famous for its appearance in Martin Scorsese’s Goodfella’s and for its popularity with truckers both local and long-haul, made the New York Times last Friday. The primary subject: “>Where Have All the Big Rigs Gone?” as reads the story’s subtitle. A relatively recent rash of fines for trucks parking in the area has put a damper on haulers’ patronage of the restaurant, on a small, triangular block bounded by Rust Street, Maspeth Avenue and 57th Place in Flushing just a bump northeast of Brooklyn.

North Carolina hauler Harvey Mundy told reporter Graham Beck, “You don’t have half the trucks in here that you used to. The last five or so years, it has been really bad with the tickets.” It’s long been a citation-worthy offense, of course, to park or idle for long periods on New York City streets, Beck reports. And “>at the urging of community groups,” he writes, “the city’s Department of Transportation and the New York Police Department have increased their efforts to enforce truck laws in recent years. The Transportation Department has installed thousands of signs and held community meetings about truck traffic. The Police Department deploys a special truck enforcement unit to problem areas.”
Such, it appears, is at work in the area around the Clinton Diner. Beck reports, though, that owner Nick Diamantis mourns your disappearance: “We lost friendly faces,” Diamantis said.
Top Stories